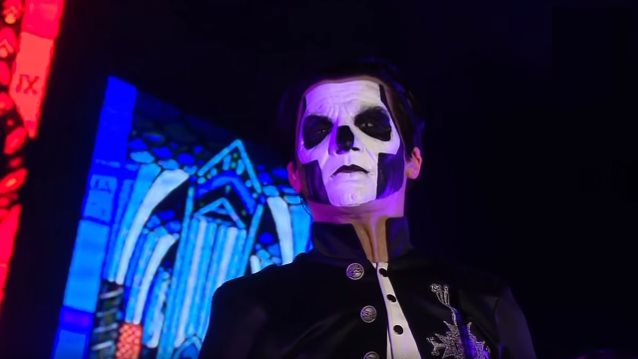 GHOST: You Don't Have To Be Anonymous Or Masked To Have A Clandestine Image

Tina Smash and Big Ric of "Big Smash Radio" conducted an interview with one of the Nameless Ghouls from Swedish occult rockers GHOST at this year's Carolina Rebellion festival, which was held May 6-8 at Rock City Campgrounds at Charlotte Motor Speedway in Concord, North Carolina, just outside Charlotte. You can now listen to the chat below.

Asked how GHOST has managed to retain a certain mystique at a time when social media has pushed every rock star into being so open that there's no mystery behind them, the Nameless Ghoul said: "Yeah, well, it's easy: just don't update people. Don't have social media, and soon as anything is being said about you, don't comment."

The Nameless Ghoul also admitted that the mystery surrounding GHOST has helped make the band more successful. "I think it definitely plays a part," he said. "The thing everybody keeps ranting about is the anonymity, which I have a comment on on the side, but I also think that you don't have to be anonymous or masked in order to have somewhat of a clandestine image. I mean, there are many artists that I know exactly where they are born and what their names are and where they live, which are still very, sort of, hidden. Even Nick Cave, who has a film about himself nowadays, is still someone who I would claim to be utterly enigmatic."

He continued: "Even if people would know who we are, or you could click on a Wikipedia page saying my date of birth, it does not necessarily mean that I have to go out on social media and tell you where I'm eating. So, yeah, I think even in the future, when it might not be as hidden, or as secret, I think that you can still uphold some sort of… level of fog around you."

The Nameless Ghoul also talked about the importance of having a strong social media presence for new bands and how GHOST has used Facebook to its advantage without making the band overly accessible. "I definitely think that [it's] a sign of the times in the sense that other contemporary bands that have gotten big at the same time as us or just before, they do, and they did what they had to do in order to become big, and now they're stuck, because they have to have an Instagram account each, and they have their little blog and they have their followers and they have to do that in order to maintain," he said. "If they stop, they will go down. That's not saying that they will fall off the face of the earth, but they will feel like, 'Oh, shit.' It's highly addictive to have followers and generate 'likes' and create content, as it's called."

He added: "I'm just so glad, especially now when… I'm not saying that we're looking in hindsight at Facebook, but we can historically look at Facebook and Twitter a little bit, and Instagram, knowing a little bit what effects it has on people, which is, unfortunately, not necessarily a lot of good things. So I'm so glad that… I mean, I've never had a personal Facebook account, so if you ever, ever, ever see one with my name on it — whatever that would be — I can assure you it's not real."

GHOST has completed work on a new EP for a fall release via Loma Vista. The effort, which consists primarily of covers, was helmed by English producer Tom Dalgety, who has previously worked with ROYAL BLOOD and KILLING JOKE, among others.

GHOST won the Grammy for "Best Metal Performance" during the pre-telecast ceremony at the 58th annual Grammy Awards. GHOST was nominated for the song "Cirice" from the band's latest album, "Meliora".

"Cirice" recently reached the Top 10 at rock radio, the first song from the band to get significant airplay in the U.S.