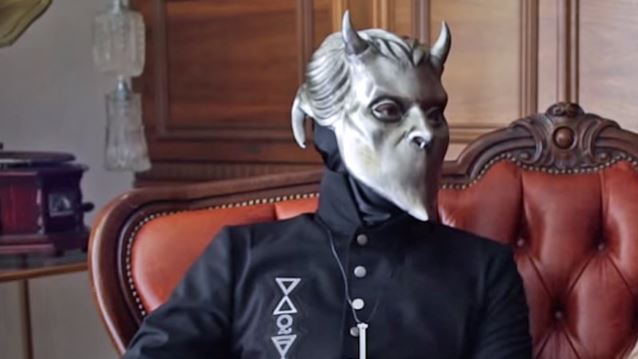 GHOST's Nameless Ghoul: 'We Go Into The Studio With The Intention Of Making The Best Record Possible'

PitCam.tv recently conducted an interview with a Nameless Ghoul of Swedish occult rockers GHOST at Berlin, Germany's Michelberger Hotel. You can now watch the chat below. A couple of excerpts follow (transcribed by BLABBERMOUTH.NET).

On GHOST's third album, "Meliora", which is a Latin word for "better," and whether it was GHOST's intention to make a "better" album this time around:

"Of course we go into the studio with the intention of making the best record possible. And I think that any band that doesn't have that intention could probably refrain from going into the studio to record a new record. But, yeah, obviously, we intended to make the best possible album that we could ever muster."

On why all of GHOST's albums have Latin titles:

"It sort of comes with the thematics of our thing, I guess. It was never really a rule that all the titles should be in Latin. But we want the records to…. Obviously, Latin is very cliché when it comes to certain black metal aesthetics and occult rock. But we want our titles to be, obviously, not easily said; otherwise, we wouldn't have named our previous record 'Infestissumam', 'cause we're basically the only people in the world that can actually say it. The intention was never to be simple like that. We want simple names for the records — like, short, at least. Where 'Meliora' was probably little bit more in line with that wish, I guess."

"Meliora" will be released on August 21 via Loma Vista Recordings. The follow-up to 2013's "Infestissumam" was helmed by Klas Åhlund, a prolific songwriter, producer and guitarist who is also a member of the Swedish rock band TEDDYBEARS, and was mixed by Andy Wallace (SLAYER, NIRVANA, SEPULTURA, LINKIN PARK, GUNS N' ROSES).