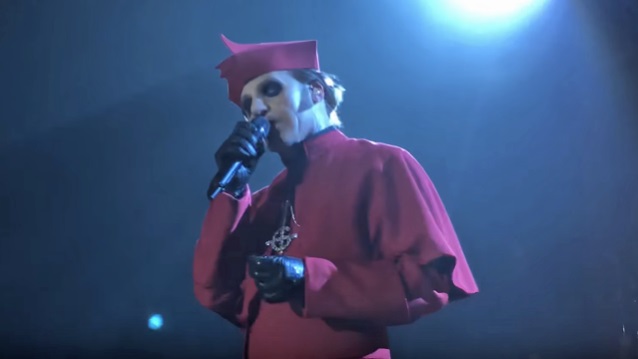 According to Billboard, GHOST has landed at position No. 1 on Billboard's Mainstream Rock Songs airplay chart with its latest single, "Rats".

It is the Swedish band's second No. 1, following "Square Hammer", which topped the chart for two weeks in January-February 2017.

GHOST lead singer Tobias Forge, who performs under the name Cardinal Copia, told The Pulse Of Radio what inspired him to write "Rats", the first single from the band's new album, "Prequelle". "A few years ago, I decided, like, 'I really want to have a big opening track that just blows people's minds immediately,'" he said. "So I wrote 'Square Hammer' and that went well. But I didn't want 'Square Hammer' to turn into a 'Start Me Up', where that always feels best to play first. I want to be able to mix it up. So we needed another song that works as an opening track. That was basically my intention with 'Rats'."

The official video for "Rats" can be seen below. The clip was directed by Roboshobo (a.k.a. Robert Schober),who has previously worked with METALLICA, ALICE IN CHAINS, MASTODON and GREEN DAY, among others.

Forge has said that the theme of the album has to do in part with the arrival of the Black Plague in Europe, among other events in history.