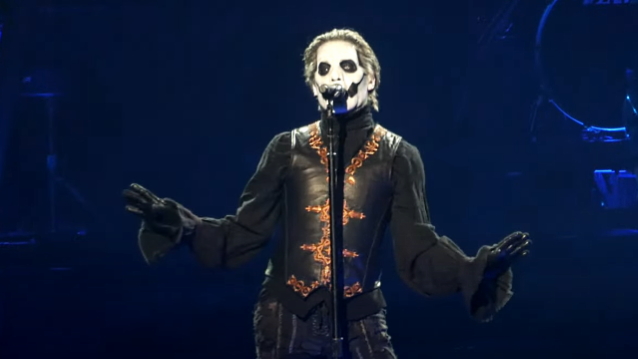 GHOST's TOBIAS FORGE: 'I Always Try To Write Songs That I Have Never Written Before'

Forge discussed the "Impera" songwriting process in a new interview with the Pittsburgh Post-Gazette. He said: "When you're writing, you just wanna make a really good record, drenched in as many hooks as you can possibly muster. The only problem with trying to create records for me, besides ability, is trying not to repeat myself. I always try to write songs that I have never written before. I always try to add songs to our repertoire that we don't have already and, lyrically, I also try to not use the rhymes that were done in the past. That's probably the hardest because you sort of run out of rhymes and words and phrases and, thus, you need to really sharpen up. Sometimes it comes out really good and sometimes I can look back on lyrics and I'm like 'yecch.'"

Asked how the collaboration with Salem and Vincent plays into that, Forge said: "They are good friends of mine and we've written quite a lot together. If we set a date to work and spend a couple days in the studio, we always come out of there with something that sounds rockin'. Usually, I come in with a few ideas to work with and then we take it from there. Since they are very professional and they work together and also together with a lot of different artists, they will always give me a little bit of outside perspective. But they have another objective to what I'm doing. Where sometimes I would dismiss an idea of my own, just because I found it predictable, they can turn around and say, 'We should do that, that's how the song should be, because it sounds so much like GHOST.' 'Oh, okay.' If I were alone in the room, I may not have thought that."

GHOST kicked off its co-headlining tour with VOLBEAT on January 25 at the Reno Events Center in Reno, Nevada. During its 16-song set, GHOST performed the recently released single "Hunter's Moon", a cover of METALLICA's "Enter Sandman" and debuted another song from "Impera", called "Kaisarion".