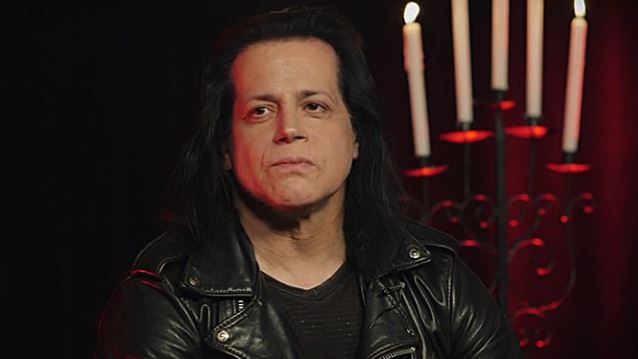 GLENN DANZIG: Why I Decided To Cover AEROSMITH's 'Lord Of The Thighs'

Glenn Danzig recently spoke to OC Weekly about his long-awaited covers record, "Skeletons", which will be released in Europe this fall via Evilive Music/AFM Records. The CD, which was recorded with PRONG guitarist/vocalist Tommy Victor and former TYPE O NEGATIVE drummer Johnny Kelly, will include the former MISFITS frontman's take on songs by BLACK SABBATH ("N.I.B."),ZZ TOP ("Rough Boy"),THE TROGGS ("A Girl Like You"),THE EVERLY BROTHERS ("Crying In The Rain") and others.

Regarding his decision to cover "Lord Of The Thighs" by AEROSMITH, Glenn said: "The second AEROSMITH album [1974's 'Get Your Wings'] is pretty cool. And maybe people who listen to DANZIG or other bands I've been in or other genres might not think AEROSMITH has some great songs, but they do."

Danzig also talked about his general mindset when choosing which songs to tackle for a covers project like "Skeletons". He said: "Unless you're gonna make it your own, leave it alone. Because everyone has already heard the original a million times and they're always gonna judge you against the original, so if you try to do it exactly the same, people are just gonna like the original. So you always have to bring a new element to it."

"One of my favorite covers records is David Bowie's 'Pinups' and I wanted to do a take on that and the record is called 'Skeletons' so I decided I'd do the skull face," he revealed.