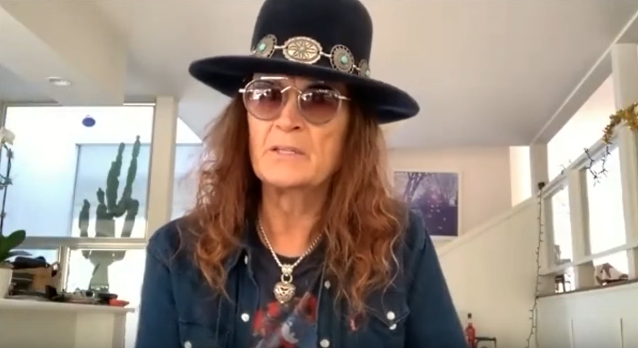 GLENN HUGHES Doesn't Rule Out Another Collaboration With TONY IOMMI

In a recent interview with Canada's The Metal Voice, Glenn Hughes was asked if there are any plans for him to collaborate with Tony Iommi again. The legendary DEEP PURPLE bassist/vocalist previously worked with the BLACK SABBATH guitarist on "Seventh Star" (1986),and later reunited with him for "Fused" (2005),in addition to being featured on the "1996 DEP Sessions" (2004) collection of previously unreleased material.

Glenn, who is currently promoting the upcoming THE DEAD DAISIES album "Holy Ground", said: "There's always something going on with Tony. We've done three albums, and you never know, and there's a possibility there'll be another one. But at this time, it's so hard to say anything, because I'm just doing everything I can to make sure THE DEAD DAISIES get to as many people as humanly possible."

Hughes previously reflected on his time fronting BLACK SABBATH in the mid-1980s in a 2017 interview with the "Collision" radio show on Australia's Voice FM. He said: "It was a little different, because number one, some of those songs were not written for me, kind of, to sing in the way I sing. It was a very dramatic change for me to be in a band that had this huge fanbase of really cult, kind of, you know, metal kind of, dark, kind of image. Let's be clear, because Ozzy [Osbourne], Geezer [Butler], Tony and Bill Ward, like, were all my family — we all grew up together, so I know these guys personally, but their catalog is very dark and sinister, but they're not, you know. And for me to wear that cloak and dagger, mystery thing, was a little bit strange for me.

"I really did enjoy making 'Seventh Star', and I made another album called 'DEP Sessions' with Tony, and [then] we did 'Fused', so I've done three records with Tony. But it was a little bit different for me singing in BLACK SABBATH," he continued. "It wasn't quite who I am. I've always liked a challenge, you know — I always like a challenge — but I think Ozzy's voice, and Ronnie Dio's voice, is perfect for that band, although I did enjoy working with those guys."

"Holy Ground" will be released on January 22. The LP was recorded at La Fabrique Studios in the south of France with producer Ben Grosse. The follow-up to 2018's "Burn It Down", will be the band's first to feature Hughes, who joined the group in 2019 as its new bassist and vocalist, replacing John Corabi (MÖTLEY CRÜE) and Marco Mendoza (THIN LIZZY).