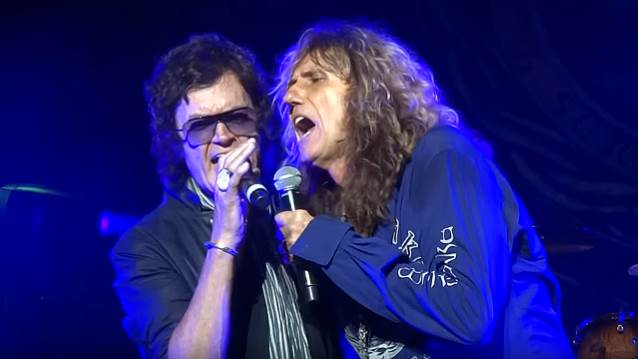 In a brand new interview with Metal Express Radio, legendary bassist/vocalist Glenn Hughes (DEEP PURPLE, BLACK SABBATH, BLACK COUNTRY COMMUNION) was asked about what it was like to join his ex-DEEP PURPLE bandmate David Coverdale on stage in California this past June to perform a couple of DEEP PURPLE classics (see video below). He responded: "It was a Wednesday at Newport Beach, I was having my hair done and I knew WHITESNAKE were playing Beverly Hills that night and knew there was a possibility I could make that show. So I was getting my hair done and I called [David] up to let him know I was coming. I get there 20 minutes before he goes on stage and I was walking towards him to give him a hug and he gives me the microphone. Basically, he asked me if I wanted to do it and I said that this is what I do. We didn't talk about it before we met up. What you can see on YouTube is evident that it wasn't rehearsed. It was very tribal and spontaneous."

He continued: "There's never been any hidden agenda between David and I. There was never a moment in DEEP PURPLE where I had to tell a lie. There's always been difficulties between members of bands, but David Coverdale and Glenn Hughes were always very close. In fact, even more so today than ever before. You can see on that YouTube footage how close we are."

Hughes also talked about attempts in recent years to reunite some of the members of the DEEP PURPLE Mark III lineup. He explained: "About six years ago, David and I, along with [late DEEP PURPLE keyboardist] Jon Lord, were talking about doing something together as DEEP PURPLE Mark III. We were talking about who was going to call Ritchie [Blackmore, ex-DEEP PURPLE guitarist]. Jon said he'd call Ritchie, but he couldn't get through to him. Then Jon got sick and died, so it didn't happen. After Jon died, me, David and Ritchie did try to get something together but it never materialized. I can't say why it didn't, but it just didn't happen. I can say to you now that I don't think it'll ever materialize. David is so busy and I am so busy that I can't lend my face to something that is not real. Yes, it would be great if Mark III could get together but we've missed that opportunity now. I said my goodbyes to Jon Lord at the Albert Hall last year and that is it. I'm still friends with Ian Paice and everybody's good, but I can't live in that past. It is something that has gone. I only want to wish Ritchie the very best in what he does and long may the legacy of DEEP PURPLE live on."

Coverdale celebrated his past in the present with this year's release of WHITESNAKE's 12th studio album, "The Purple Album". The new set was billed as "a re-imagination of classic songs from David Coverdale's time as the lead singer for DEEP PURPLE's Mark III and Mark IV studio albums." PURPLE classics revamped for the new set include "Stormbringer", "Lady Double Dealer", "Soldier Of Fortune" and "Sail Away". Coverdale was DEEP PURPLE's frontman from late 1973 to early 1976 and sang on the albums "Burn", "Stormbringer" and "Come Taste The Band".

Coverdale explained that shortly before DEEP PURPLE co-founder Jon Lord's 2012 death, he was eyeing a DEEP PURPLE gig featuring all the band members throughout the lineups. The Pulse Of Radio asked Coverdale what if any relationship he has with the frontman he replaced — the great Ian Gillan. "Ian was one of the nicest blokes I met," he said. "I'd flown over to [England to] do a charity show for Roger Glover at the [Royal] Albert Hall — a thing called 'Butterfly Ball' [in 1975] — and Ian was there and we ended up carousing for, like, four days and nights. I ended up sleeping from the moment the plane took off from Heathrow back to Los Angeles. Woke up as we landed. The perfect journey! [Laughs] But, yeah, I have absolutely no problem sharing a microphone with Ian. None. Y'know? To me, it would be the ultimate expression of gratitude to breathtaking loyalty from PURPLE fans. It's amazing. It truly is."