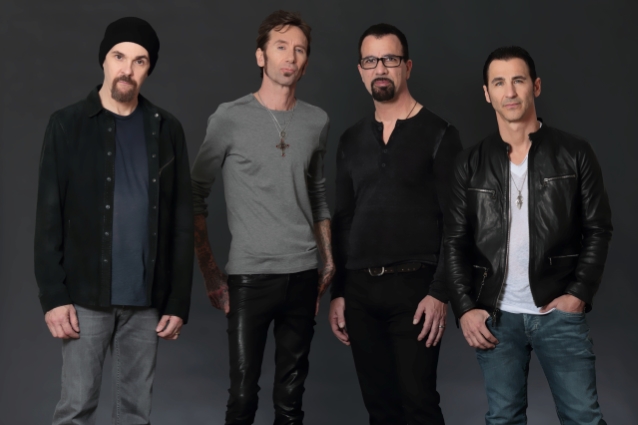 GODSMACK Drummer On Vocalist SULLY ERNA: 'He's Our Leader, And We Follow Him And Trust Him'

Prior to GODSMACK's performance at this year's Download festival at Donington Park in Leicestershire, England, drummer Shannon Larkin spoke with Adam Hayward of Metal Wani. The full conversation can be streamed below. A few excerpts follow (as transcribed by BLABBERMOUTH.NET).

On how the band's latest record, "When Legends Rise", reflects today's GODSMACK:

Shannon: "It was a change for us. Our records come four years apart ever since I joined the band 17 years ago, and it hasn't been a conscious decision to do it — it's just it usually takes us a year to record and write the record, and then we tour for two years, and then we take some time off. Every four years, it happens like that, and with the distance between those records, we usually try and do something different so we're not making the same record over and over again. Sully's [Erna, vocalist] our visionary. It's his band. He hand-picked all of us. He's our leader, and we follow him and trust him. He came to us this time with wanting to do a more modern production and use these L.A. producer guys that, you know, a lot of the rock bands in America are using now. We all turned 50 years old as humans, so we're trying to mature as we get older, because if anything, we try to keep this band real. In your 50s, metal — particularly hard metal, hard rock — is a young man's game. It's like sports. If you're Michael Jordan, you're the greatest basketball player ever, but once you're past 40, everybody's all, 'He's old.' We want to try and make our music to where we can represent it on stage without feeling like we're trying to act like kids that are angry and still pissed off at the world, which we were 20 years ago. It was amazing to us to come out with what we felt was a quite different sound from everything we've done before, especially production-wise, and still have our fan base embrace it."

On how else the album differs from its predecessors:

Shannon: "We were in a happier place in our lives, particularly Sully, who does all the lyrics. The lyrics are quite different. They're way more about rebirth than about actually dying, so that's a big difference right there with the tone of the record. As far as writing the actual music, this was also the first time that we used outside writers. These L.A. producers, they also helped craft these songs that have a more commercial aspect, I guess, for the radio, which has always been our friend. We've always done really good, even with our most heavy music, at rock radio in America, which is very important over there. It's a little different than here. Everything kind of goes by radio over there, so Sully came to us with this idea of using different writers [for] the first time in [an] over-20-year career... The first song he brought us that he'd written with someone else — Erik Ron, who ended up producing the record because of co-writing this song — was 'Bulletproof'. When we heard it, we heard this modern sound and modern production. We'd never had synthesizer sounds in our songs before. We've always been just a rock band. When he played us that song, but it still had the toughness and his lyrics are brilliant, we were like, 'Wow, we can represent this.' The sound drastically changed."

On why GODSMACK didn't celebrate the 20th anniversary of its debut album by performing the record in its entirety:

Shannon: "The first album came out in '98, so 2018 was the 20th anniversary. We thought about going out and doing the first record in its entirety, and then, we had just put out the new record. We were torn. We didn't want to go out and do a tour for the first record and celebrate this 20-year thing when we felt that we made this new record that is a rebirth and a new sound and a new direction for us to follow for the second part of our career... Maybe a 25-year anniversary [tour] will happen."

Shannon: "There's a lot of camaraderie backstage, it seems like, here in England. Another thing is, the crowd are warriors, because the last time we played [Download] and this time, it's a mud-fest, and no one cares. Everybody's just in it for the music. It feels very good; it feels very united."

Shannon: "I'd like to think we have a chance. I know FOO FIGHTERS are already there. For metal bands, SLIPKNOT is still around. They should be around for a while. It's hard to predict the future. You have new bands coming up like GRETA VAN FLEET, who are using classic rock [as an] influence, which I love. They could be headliners some day. You have bands like HALESTORM. They could move up to a headliner in five years. Who knows?"

GODSMACK continues to tour in support of its seventh studio album, "When Legends Rise", which came out in April of 2018. The band recently announced a fall American tour with HALESTORM, which kicks off September 20 in Green Bay, Wisconsin.