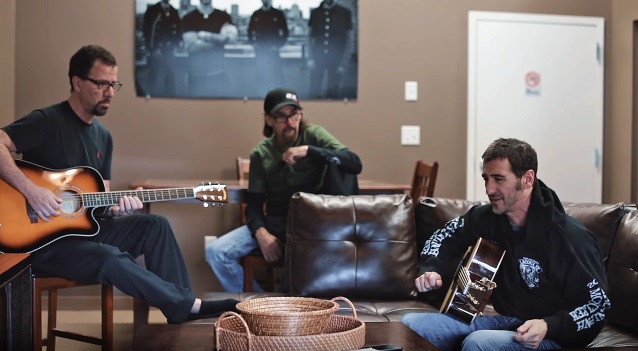 GODSMACK: Making Of 'When Legends Rise' Album Part One (Video)

The first in a series of video clips featuring behind-the-scenes footage from the making of GODSMACK's new album, "When Legends Rise", can be seen below. Due on April 27, the disc is GODSMACK's seventh studio effort and follows up to 2014's "1000hp". It's also the band's first release through BMG after splitting with its longtime home, Republic/Universal.

Asked what inspired the songs on "When Legends Rise", frontman Sully Erna explained: "It was just about evolving as a songwriter. I wanted to stretch my wings out even further to use all the experiences I've had with writing different types of music over the years and applying that to find a way to introduce a newer, fresher, more mature sound, but still maintaining the power of GODSMACK."

Erna said that the title of the album refers to "the band and our journey," adding, "It's been an amazing road we have traveled through all the ups and downs. But being able to conquer those challenging times with alcohol and egos and everything else that can tear a band apart is what we are the most proud of."

"When Legends Rise" was recorded at GODSMACK's headquarters (GSHQ) in Derry, New Hampshire and produced by Erik Ron and Erna.

Erna told Des Moines, Iowa radio station Lazer 103.3 that "When Legends Rise" will contain GODSMACK's first full ballad. He explained: "We're debuting our first ballad for GODSMACK, which is a bit more epic, like a 'Dream On'/'November Rain'-style ballad. There's a lot of textures on this record, a lot of flavors for everybody, and I hope everyone enjoys it."

Erna added that he thinks the new LP is "really strong," saying: "I think people are going to love this record, I really do. It's such a departure from what we've done in the past, but at the same time maintaining the integrity and the power of what the band has always been about."

The vocalist cited the title track, "Unforgettable" and "Eye Of The Storm" as "a couple of my favorites."

Asked why the band felt the need to experiment on the new disc, Erna replied, "This is really a reflection of where I am at this time and place in my life, and it's about evolving. It's about not doing the same thing over and over again and growing with your audience and growing with the times and growing as individuals and as songwriters."

GODSMACK will perform at several music festivals this spring and summer, before launching a tour with SHINEDOWN on July 22 in Clarkston, Michigan.