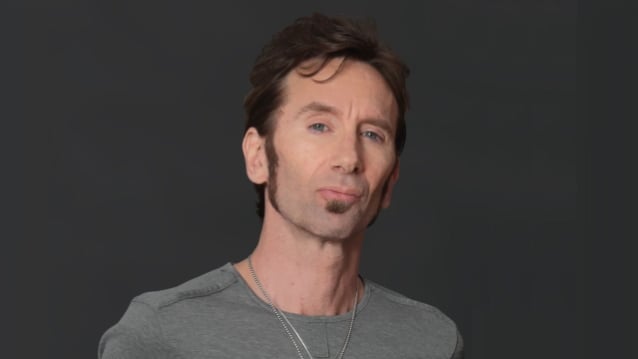 In a recent inteviw with Ghost Cult magazine, GODSMACK's Shannon Larkin discussed his reluctance to publicly air his political views. Speaking about the recent U.S. presidential election and how it relates to the ongoing coronavirus pandemic, the drummer said: "I really felt that whoever won [the election], it's all gonna come soon, and the country's gonna normalize. It'll never be the way it was before, because we have this bug that is transforming itself as we try and make antidotes. Even with [the pharmaceutical company] Pfizer saying, 'Oh, we got 90 percent [efficacy rate on the COVID-19 vaccine],' or now, today, it's 95 percent. So if everybody goes and gets the shot, then why doesn't the country open back up? 'Oh, because they don't know the side effects…' Whatever.

"We've been through this before — H1N1 and the bird flu thing. This is real — I'm not downplaying COVID, man. Wear a mask and social distance as much as possible. But when I look at a football game and I see they let — I don't know — ten thousand, or five thousand, people into this thing. And they're all sitting in groups anyway, and they all have to go to the bathroom, and they all have to walk around…

"To me, I feel like with the COVID-19 having, what, a 99.9 percent survival rate — something ridiculous, a super-high survival rate — it's totally a real thing, and it totally sucks, but it is the flu," Larkin added. "And we must go on with our lives and careers. I mean, I've got 28 dudes that literally don't have any other skills. I know the soundman for Luke Bryan, Frank, and he's, like, 'I don't do anything else.' And the money stops. Everybody's suffering right now."

On the topic of whether his Florida-based psychedelic rock side project THE APOCALYPSE BLUES REVIVAL will tour in support of its self-titled album, which came out earlier this month, Shannon said: "THE ABR is gonna tour. We're not gonna stream anything. We're gonna let this year go, let the new president get in and sit, and let the idiot extremists fight it out, or whatever, in the streets — whatever the hell is gonna happen, or whatever — let them get it all out of their systems, and then let the country notmalize, and love and peace will reign again. And then people can go out and enjoy music again, which was a sanity saver for a lot of us, especially people like me that live for music. And I'm a musician, but I have many friends that live for music and concerts. And that's their out from their day jobs and everything, and it's the way it should be. And now that's been taken away. So we're swelling the ranks of depression and suicide and just basic divisiveness between half the country — all this crazy stuff."

Shannon went on to say that he is against musical artists publicizing their political views, especially during award show speeches.

"I have extreme personal feelings about this country and which way it went and it's going and all that, but I would never say that here with you or anyone else, because I feel I'm an entertainer, man," he said. "It's like when Madonna goes up to accept her tenth Grammy, and all she can harp on about is whoever is dying in Lithuania or whatever. And I understand, but I'm, like, you're an entertainer, and I'm watching the Grammys to see you thank your fans for the music that they love, that you created, and you get this award — not to hear your political views. So I'm not gonna be that guy — whoever is watching this — that's gonna spout off, 'Oh, yeah, Biden rules,' or, 'Yeah, Trump's the best.' I don't care. I have my own feeling on it. But I'm not trying to — if I was, I'd be on a different show. This is a music show. And I'll open up personally — I'm a very open book; I wear my heart on my sleeve, man. But politics, I think I'll take the high road on that one."

Acknowledging that he was the one who brought up politics in the first place, Larkin continued: "When we talk about touring, that brings up politics, because the damn country is shut, man. And with the Democratic party winning, I feel that it's probably gonna stay shut for a while longer. We'll see what happens. But I spoke my agent, for ABR — we're with a blues agency in North Carolina, and we've been with them for four or five years now. And they told me three days ago that out of all the states in the United States, Florida has opened up the most for club bookings. Now, a lot of these clubs are not even — they won't even allow half capacity, so the capacity is lower. But at least they're letting shows. So, obviously, the bands don't get paid as much. But the blues — what are we gonna make? So I'm thinking that, hopefully March-April, THE APOCALYPSE BLUES REVIVAL will go on tour at least in the Southeast, no matter what Biden does with opening the country back up or whatever."

Shannon's GODSMACK bandmate Sully Erna has been more vocal about his political opinions in recent years, saying in a July 2020 episode of his Internet show "Hometown Sessions" that if "Trump stays in [office], COVID's gonna be a big, messy pain in the ass, and there's gonna be more people burning down Wendy's fucking restaurants. If Trump fucking is gone, all of a sudden they're gonna have this miracle vaccine that those fucking liars have been holding on to."

Sully also addressed the fact that several polls showed Trump trailing Biden by double digits nationally and losing in six battleground states that were key to his win in 2016.

"Are you gonna tell me that Biden's gonna win this thing?" Sully asked rhetorically. "Whether it's Trump or not, Biden's gonna be the guy? The guy that can't even remember his wife's name.

"I don't care if Trump stays or goes, but do not let Biden control this country," he said. "Because if Biden controls this country, he's not really controlling it — it's all the people pulling his puppet strings that are gonna control it. I guarantee you we're gonna be really close to losing this country if that dude gets in office. And that is not gonna be a fun place to live. What used to be one of the greatest countries in the world, right now it's an embarrassment. People are laughing at us all over the globe. Even the crazy countries that we sit there and we watch the news sometimes, because they're beheading people and doing this radical shit, and we're, like, 'Wow, man. [I] don't wanna live over there,' now, all of a sudden, those countries look at us and they're, like, 'What the fuck is going on in America right now? Those people are out of their mind.'"

This past February, Erna came under fire for sharing a post that was flagged as part of Facebook's efforts to combat false news and misinformation on its news feed. The post in question criticized then-Democratic presidential candidate Sen. Bernie Sanders's plan to raise the minimum wage and provide universal health care to all Americans. It also cited Sanders's Medicare For All plan, a single, national health insurance program that would cover everyone who lives in the United States.