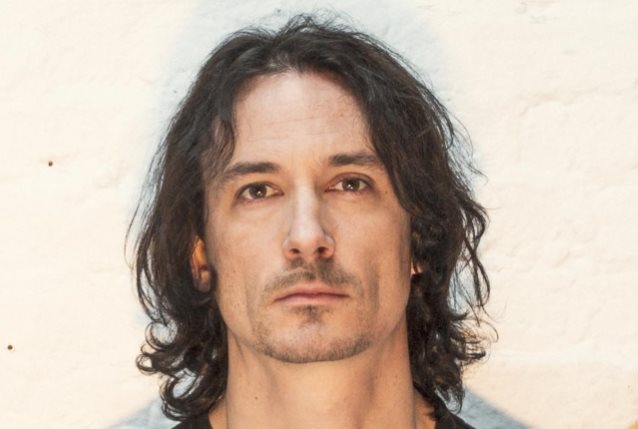 GOJIRA Frontman: 'We Just Knew That We Had To Move Forward And Evolve'

Oran O'Beirne of Ireland's Overdrive recently conducted an interview with vocalist/guitarist Joseph Duplantier of French progressive metallers GOJIRA. An excerpt from the chat follows below.

Overdrive: There was a slight worry amongst critics when [the new GOJIRA album, "Magma"] was released because of the slightly different direction that you took on the album. There is no doubt that "Magma" was a very important step for GOJIRA. Did you have any concerns as to how people would react to it?

Duplantier: "Well, we just knew that we had to move forward and evolve. We've always felt that way about what we do. Of course, a small part of me was a little concerned as to what people would think about it, but overall, I was just really excited about the album because we just put so much hard work into it and went through so much personal stuff during the writing. This time around, I really felt that we had much more time to live with the music and approached them from very different angles. From the beginning of the writing process to the point of when we started recording was approximately a year or so, and a lot of things happened during that time. We had a lot of new ideas and the creativity was really flowing. Out of all the ideas and material, we just kept the best of the best and felt so comfortable with it all, that we had made our minds up that if people were not comfortable with the material, then that was going to be just fine with us. That’s what being in a band is to us. Especially a 'rock/metal'band. I believe in being honest with the music we are making and being honest to our gut as to what we should go forward with and be proud by it. We knew also that the song structure and delivery is a little easier to digest for people who would not be directly into metal. The album has a different feel to it. It's still very heavy, but in a different way, if you know what I mean. I knew that some of the death metal purists would be a little upset by some of our decisions on this album [laughs], but it's impossible to please everyone, so we just followed our hearts and created something that made us happy and proud of."

Overdrive: Now in hindsight, do you feel more confident in taking steps outside the conventional box and open to more experimentation?

Duplantier: "Yes, indeed. But again, people have said to us, 'You have taken such a risk with 'Magma',' and, to me, I really feel like we didn't take a risk. We just stuck to the formula that we had always followed since we started the band, which is to just play and see what comes out. No restrictions, no boundaries — just follow our hearts with what we do. I really feel that with 'L'Enfant Sauvage' and 'Magma', we have opened up a new dimension to GOJIRA. It really began on 'L'Enfant Sauvage', especially with the vocals, because, for me as the vocalist, I needed to sing more rather than scream. I need a more subtle approach to the vocal side of things. I'm in my thirties and not twelve anymore, and I don't just want to go fast and loud all the time; I want to create something interesting. I'm a huge music fan and really love all kinds of music. For instance, I really like RADIOHEAD as well as many other kinds of bands. I don't just listen to death metal 24/7. [Laughs] When you get older and get a more confidence in who you are as a person, you don't tend to care what people are going to think about your choices in life, be it music, fashion or whatever else you may have a particular interest in. I see what you mean when you say gamble when it comes to the die-hard fans, but for us to keep going as a band, we have to follow our hearts and desires for what we do. We are not married to our fans, and I totally understand if one day they wake up and don't like what we are doing, and I totally respect their decision to move on and listen to CANNIBAL CORPSE or something like that. [Laughs] In the end, we gain more fans than we are losing, so I guess we are doing something right."

Read the entire interview at Overdrive.