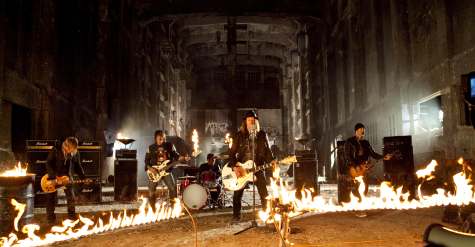 "Starlight", the new video from Swiss hard rockers GOTTHARD, can be seen below. The clip was filmed in an old animal food factory near Berlin, Germany where scenes from the Quentin Tarantino film "Inglorious Basterds" were previously shot.

According to a press release, the "Starlight" video features GOTTHARD fans "doing what they love to do: a concert crowd, urging on their band as loudly as possible."

The filming went on into the middle of the night and saw the band performing in the middle of blazing flames in honor of their new album, "Firebirth".

"During the filming of the video, we could feel again that the chemistry between us and the fans was great," the musicians said. "We are sure this will be seen in the clip."

For GOTTHARD, it was very important that to include some of those fans who have shown the band support through some of its darkest times, including the passing of the group's longtime singer Steve Lee.

"We simply have the feeling that not only those of us in the band have become even closer but also our GOTTHARD family, those who are in our surroundings, are close to us and shared with us the difficult unhappy months after Steve's death," GOTTHARD said. "We want to show this in the video: we are a community and we are rocking together again!"

"Starlight" was released as a single on April 20. The title track was made available in two versions: a rock and an acoustic rendition.

"Starlight" was one of the first songs that the band wrote with new singer Nic Maeder.

"The chemistry between us worked immediately," says guitarist Leo Leoni. "It is really unusual to be able to sit down together and straightway write a song which is later the single."

"Right from the get-go, we had a really laid-back atmosphere between us," agrees Nic. "It was therefore not hard to come up with good ideas. It was really good fun from the start!"

"Starlight" comes off GOTTHARD's new album, "Firebirth", which will be released on June 1 via Nuclear Blast/Warner Music. The CD was produced at the band's own Yellow House Studios in Lugano, Switzerland, with guitarist/songwriter Leo Leoni and Paul Lani (who has previously worked with GOTTHARD on several of their earlier albums, including "G-Spot" and "Homerun") at the helm.

"Firebirth" marks GOTTHARD's first release with Maeder, who was born in Lausanne, Switzerland, lived in Melbourne, Australia and grew up between Switzerland and "Down Under."

GOTTHARD vocalist Steve Lee was killed on October 5, 2010 in what has been described as a freak road accident in Nevada.

The "Firebirth" album cover depicts the firebird Phoenix, which symbolically rises "from the ashes to the sky" — this line expresses what each GOTTHARD fan feels and underlines the turbulent time that GOTTHARD has gone through in the past months.

GOTTHARD's first live shows with Maeder will take place in May in South America before the band makes several European festival appearances. The new group's German live debut will take place on July 14 at the Bang Your Head!!! festival in Balingen.

CrankItUp.se recently conducted an interview with GOTTHARD bassist Marc Lynn and Nic Maeder. You can now watch the chat below.