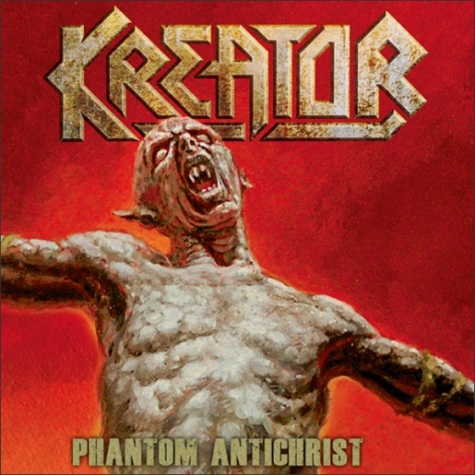 "Phantom Antichrist", the video for the title track of the new album from German thrash metal veterans KREATOR, can be seen below. The clip was helmed by Poland's Grupa 13, which has previously worked with BEHEMOTH, ELUVEITIE, SONATA ARCTICA and DECAPITATED, among others.

Commented KREATOR guitarist/vocalist Mille Petrozza: "The clips produced by Grupa 13 are groundbreaking visual trips that justify the existence of music videos in this day and age. In support of the lyrical concept of our new album, I could not think of a better creative solution than a collaboration with these great visionaries."

He added, "Grupa 13 strikes again! The most apocalyptic video in the history of KREATOR is here!"

The limited edition of "Phantom Antichrist" will be made available as two-disc digipack, including a bonus DVD.

The "Phantom Antichrist" single was released April 20 on seven-inch colored vinyl and as a digital download via iTunes, Amazon and various other digital music providers. The release also includes the exclusive IRON MAIDEN cover "The Number Of The Beast".

A brand new promotional photo of KREATOR can be seen below (photo by Stefan Heilemann of Stuttgart, Germany's Heilemania).