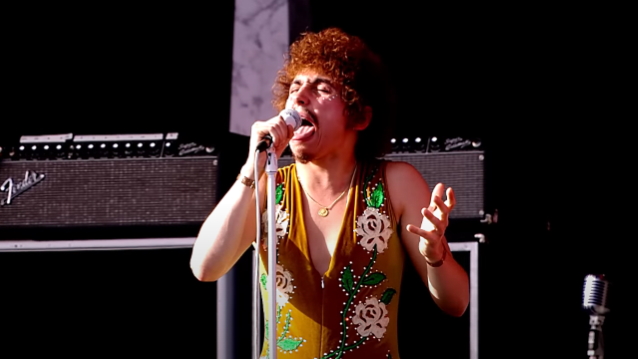 Earlier today, Josh released a video message in which he said (as transcribed by BLABBERMOUTH.NET): "I just wanted to express how beautiful and how awe inspiring these couple of shows have really been — truly. Also, unfortunately, they've been rather painful.

"The last time I spoke with you, I had asked for your understanding; I was dealing with a ruptured eardrum. Unfortunately, while the eardrum continues to heal, it also has continued to cause me great deal of physical pain, which has made it very difficult to perform. I've been fighting through this for the last week now and I've been trying to push through each show. And I'm at the point where I think I need a period of time for more healing. Unfortunately, that means rescheduling the shows for the rest of this month, which kills me to do this, especially on such a short notice.

"I'm truly sorry to everyone in El Paso, Tucson, Anaheim and Sacramento. This year has been an extremely humbling experience. I can't begin to thank all of you enough for your seemingly endless support and understanding.

"Again, I can't express how difficult this decision is to make, truly. I'm so, so grateful and appreciative of all the love and positivity that you all seem to have in boundless supply.

"This is a really disheartening setback. And I think when we're all finally together and we're celebrating in that spirit, I think all will be well and right."

GRETA VAN FLEET kicked off its "Dreams In Gold" tour in Michigan in March.

Josh, his guitar-playing twin brother Jake and their younger bassist brother, Sam, formed GRETA VAN FLEET in 2012 and released their debut album five years later. In 2019 they were nominated for four Grammys, winning "Best Rock Album" for "From The Fires", which included the hits "Black Smoke Rising" and "Highway Tune".

Jake recently told InForum the next GRETA VAN FLEET album, which is already in the works, will be another musical step forward.

"The path we've taken hasn't been intentional; it's an organic path of its own," he said. "The next will be one of the most powerful records we've ever done."

To all our fans in El Paso, Tucson, Anaheim and Sacramento, please watch this video message for you from Josh.

We’re sorry to share this news. Unfortunately, due to continuing issues related to Josh’s ear, El Paso, Tucson, Anaheim and Sacramento must be rescheduled.

As soon as we have new dates, they will be posted. Your existing ticket will be valid for the new date and, once announced, refunds will be available at point of purchase.