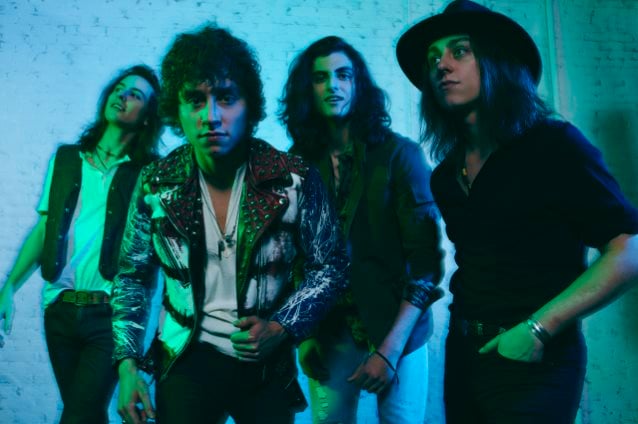 Ravenna Miceli and Steve Pappas from Cleveland.com and Internet radio station oWOW Cleveland conducted an interview with twin brothers Josh and Jake Kiszka of emerging young Michigan rockers GRETA VAN FLEET prior to the band's August 18 show at The Grog Shop in Cleveland, Ohio. You can listen to the full chat using the SoundCloud widget below. A few excerpts follow (transcribed by BLABBERMOUTH.NET).

Jake (guitar): "We grew up in a very creatively free environment. We grew up around a lot of vinyl and music, and not just music, but film and literature and things like that. We've always been playing music. Josh has always been singing and I'd always play guitar. It was around high school when I started bringing buddies over to play. I had a buddy play drums and Josh would come in and sing and Sam [Kiszka] was playing bass. That was the first formation of that. The foundation. We brought in Danny [Wagner] a year later after the drummer couldn't keep up. That was GRETA VAN FLEET."

On when the band finds time to write and rehearse:

Josh (vocals): "These days we don't do those things. Writing music is a natural process that is always going on. Even walking down the street something is going through your head."

Jake: "The way that we write, there's not a formulaic way that it's done. Songs write themselves when they come. I remember I was lying in bed pondering through some melodies. I came up with a riff. It was 3 a.m., so I had to go put it down, like 'Mom...' [mimics his mother's voice] 'Shut up!'"

On the comparisons to LED ZEPPELIN and whether the band has any musical training:

Jake: "None of us have ever taken a lesson in our life. We're autodidacts, so we had to teach ourselves."

On how the band signed to Lava Records:

Jake: "I don't think we ever planned to be on any label because of the approach and the type of music we play. We wanted to build it up from the bottom up and do it on our own, but Jason Flom from Lava/Republic heard our music and we had a call from management and said that 'Jason Flom and Lava/Republic Records want to sign you,' so we said, 'Bullshit.' They flew us to New York and we met with everybody. No, that's not true. We didn't fly to New York. We had a Facetime [chat] with Jason Flom and he didn't want to fly us down there, he just wanted to sign us and he signed us. We said, 'Okay.' He was great and the deal was great. We went through an entertainment lawyer and we agreed to do it and it's been awesome."

On whether the band is surprised by their sudden success:

Josh: "In no way did we expect the music would garner this much immediate attention. It continues to be a 'wow!' scenario. It seems that as we go, more things keep happening and we've envisioned a kind of success we would have, just because we're being ambitious about what we're passionate about is what we're going to be, having a vision. When it's really happening and setting in and going far beyond your expectations, then it's like a magical thing. It wasn't even an intentional thing. It was just a natural response to the world around us."

On the band's primary musical influences:

Jake: "Early on, we had so many vinyls laying around that a lot of those became influences. I think the one common place we all meet is the blues. Being a guitarist, for me, it would be Elmore James and Muddy Waters and a lot of the roots stuff we grew up listening to. We all have varying influences."

Josh: "My favorite blues artist is Howlin' Wolf. Something about that is magical."

Josh: "It seems like everybody could almost go off into their own category as musicians in this band. Jake seems to be more rock and roll foundation. If I said 'rock' without the 'roll,' he'd get all pissed off. It seems like Sam likes jazz and that's a lot of his influences and that's where he gets off on the keys a lot. Daniel, I think, is very folk, oddly enough as a drummer. When he's on the guitar and writes, that's what comes out. And I like world music. I really like the sounds of big choruses, choirs and drums and things like that."

On what people can expect from a GRETA VAN FLEET show:

Jake: "We hope to convey enough high-energy and hopefully you can hear the influences and really enjoy the songs and hopefully everybody can move. We brought in the keys for the acoustic portion of the set and in the end, we do a lot of jamming around. Hopefully we can show you the dynamics."

GRETA VAN FLEET's four song debut "Black Smoke Rising" EP was released this April via Lava/Republic. The EP's lead single "Highway Tune" recently attained the No. 1 spot on the U.S. Active and Mainstream Rock radio charts, and No. 1 on the Canadian Active Rock radio chart. This milestone came just as the band wrapped up leg one of its first U.S. tour, with all dates completely sold out, the single at more than 3.8 million Spotify plays, and the companion music video closing in on 2 million YouTube views.