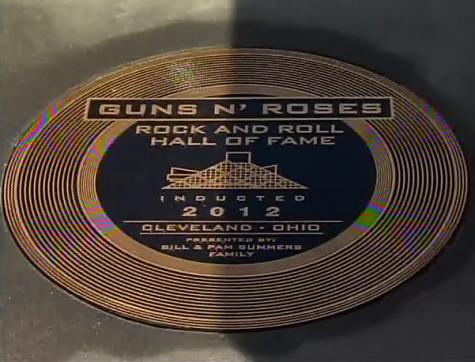 Bronze plaques in the ground honoring the newest class of Rock And Roll Hall Fame inductees were unveiled earlier today (Wednesday, April 4) in front of Public Hall in Cleveland, Ohio.

A construction team member told NewsNet5.com only 14 are in the ground, the other three were coming Wednesday morning.

"They came in on Saturday and we moved heaven and earth to get them in the ground on time," said one worker.

Watch a NewsNet5.com video report below.

As previously reported, GREEN DAY has been confirmed to induct GUNS N' ROSES into the Rock And Roll Hall Of Fame, according to RollingStone.com. Their participation this year ends the speculation about who was going to induct GUNS, but questions still remain about which members of the band will show up for the April 14 ceremony in Cleveland. Slash, Duff McKagan, Steven Adler, Matt Sorum and Dizzy Reed will all be there, but it was reported this week that Izzy Stradlin won't attend and Axl Rose's participation is still unclear.

According to The Pulse Of Radio, Slash said last week that GUNS N' ROSES will not perform at the event, and Stradlin's absence would seem to confirm that whether Rose shows up or not.

It is also not clear whether GREEN DAY will perform instead.

Slash told RollingStone.com earlier this week that Rose "hates my guts." The two have not performed together since 1993. Rose currently tours with a completely different version of GUNS N' ROSES featuring no original members but him.

As for the other inductees, Chris Rock will induct the RED HOT CHILI PEPPERS, Chuck D will do the honors for the BEASTIE BOYS, Bette Midler will induct Laura Nyro, ZZ TOP will be on hand for Freddie King, Carole King will induct Don Kirshner, John Mellencamp will pay tribute to Donovan and Steve Van Zandt will handle duties for the SMALL FACES/FACES.