GUNS N' ROSES has begun selling a new t-shirt that appears to take a jab at U.S. President Donald Trump.

Earlier in the month, Trump visited a manufacturing plant without wearing a face mask as GUNS N' ROSES' rendition of "Live And Let Die" played on loudspeakers during his visit. Video footage of Trump's visit went viral because he and his entourage were at a Honeywell factory in Phoenix to witness the production of anti-COVID-19 N95 masks, with the soundtrack also reportedly consisting of the likes of SURVIVOR's "Eye Of The Tiger" and ANIMALS' "House Of The Rising Sun".

In response to the Internet hoopla, GUNS N' ROSES has just released a shirt features the slogan "Live N' Let Die With COVID 45", apparently referencing the fact that Trump is the 45th president of the United States.

The shirt is priced at $25 and available for order in sizes small through double XL. Look for the shirt to ship on June 10.

"Live And Let Die" was originally written by Sir Paul McCartney for the 1973 James Bond film of the same name, and performed by WINGS. The song was covered by GUNS N' ROSES on their 1991 album "Use Your Illusion I", and it has since become a staple of the group's live set.

GUNS N' ROSES singer Axl Rose has frequently spoken out against the Trump administration, most recently taking a shot at U.S. Treasury Secretary Steve Mnuchin. The politician then returned fire asking Rose what he'd done for the country lately, but mistakenly inserting an emoji of the Liberian flag instead of the U.S. flag.

The exchange caught the eyes of "Saturday Night Live" and "Last Week Tonight With John Oliver", who both poked fun at the battle.

Rose has been an outspoken critic of the Trump administration on social media, and also recently criticized a decision by the sheriff of Orange County, California to not enforce beach closures that were mandated by the state's governor. 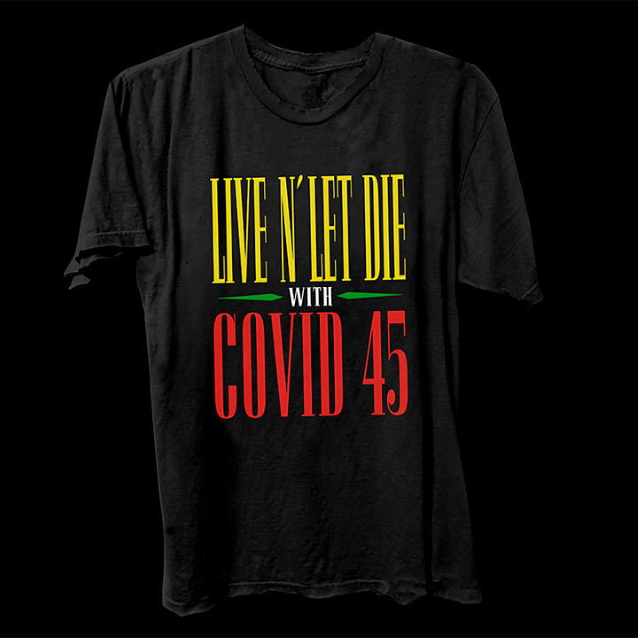 They blasted “Live and Let Die” while Trump walked around a Honeywell plant today in Arizona without a mask. It’s hard to believe this clip is real. pic.twitter.com/M1dMe8KaMK