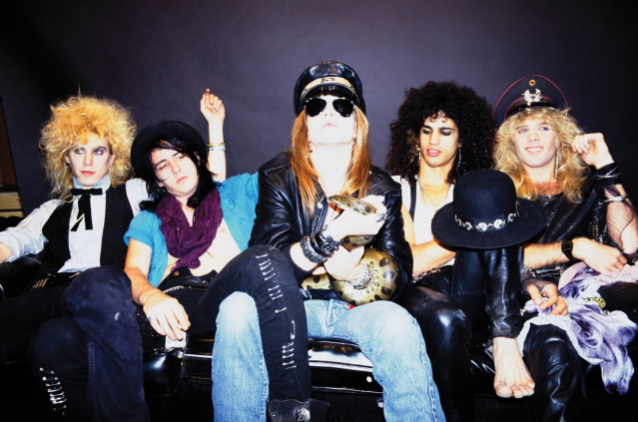 Marc Canter and Jason Porath, the authors of the critically acclaimed book "Reckless Road", have launched part two of the inaugural first season of their video podcast "The First 50 Gigs: Guns N' Roses And The Making Of Appetite For Destruction".

"Reckless Road", which was published in 2008 and won an IPPY for "Pop Culture Book Of The Year", was just the tip of the iceberg of an archive created by Canter, photographer, music historian, and owner of the world-famous Canter's Deli. Canter captured GUNS N' ROSES' formative years and the heyday of the Sunset Strip music scene.

"The First 50 Gigs: Guns N' Roses And The Making Of Appetite For Destruction" was designed as a gift to fans to unlock the stories behind the most famous songs from the ever-elusive band, in particular the younger fans, many of whom were not even born when "Appetite" came out. It's an opportunity for them to learn about the stories behind the making of "Appetite For Destruction".

GUNS N' ROSES guitarist Slash said: "There isn't a better person to release any material to do with the coming together and the history of GUNS N' ROSES and where it went and what was going on behind the scenes than Marc."

The first half of season one picks up multiple threads of this origin story and begins to weave them together, including several of the early musical inclinations and garage bands of Slash, who would go on to become one of the most famous and recognizable musicians of all time; the history of the Sunset Strip which set the stage for the forming of the band; and charts the incestuous, revolving door of individual members and their early bands leading into the original "Appetite For Destruction" lineup.

The second half of Season 1 meticulously narrates the transition from L.A. GUNS to the original GUNS N' ROSES and then to the "Appetite" lineup, and provides an up-close and intimate portrait of the very first show of the famous "Appetite For Destruction" lineup, which includes Axl Rose, Slash, Izzy Stradlin, Duff McKagan and Steven Adler. New episodes will be released every other Wednesday starting this week for the next eight weeks.

The show is available in audio-only format on all major podcast streaming platforms including Spotify, Apple, Google, Audible, Amazon and directly on "The First 50 Gigs" web site. The video version of the show that showcases never-before-seen audio and video from Marc's archive, along with bonus episodes, is available via subscription on Spotify, and a premium subscription via Patreon that includes early access to the video version of each episode, along with access to exclusive photo galleries, merchandise giveaways and more.

"Marc's one-of-a-kind archive on the early days of GUNS N' ROSES and the first 50 gigs of the 'Appetite' lineup of GUNS N' ROSES is unprecedented," says Porath. "Marc truly captured lightning in a bottle and the power of those images he and Jack Lue created will now be amplified by first-hand accounts by the people who were there, giving audiences a true play-by-play unfolding of events."

He continues: "By retelling this story in podcast form, 'The First 50 Gigs' can take listeners deeper into stories, personalities and events and explore every aspect of this origin story that often is left on the cutting room floor of a book or documentary. Anyone around the world can immediately transport themselves back in time to the 1980s Sunset Strip and follow the action that led to one of the greatest rock n' roll breakthrough stories of the decade."