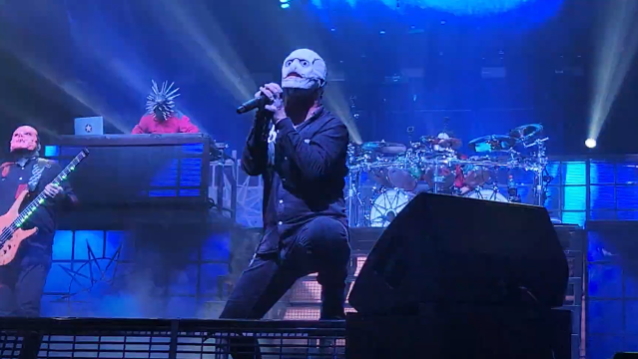 SLIPKNOT's new album will be released "very soon," according to Corey Taylor.

The band's frontman offered an update on the upcoming follow-up to 2019's "We Are Not Your Kind" during SLIPKNOT's concert Wednesday night (June 1) at Heritage Bank Center in Cincinnati, Ohio.

After confirming that SLIPKNOT's new LP is on the way, he told the crowd: "Now, we don't have an exact date on it, but I'm here to tell you, you're not gonna be waiting very, very fucking long. Goddamnit, I promise you, you will have new fucking SLIPKNOT music very fucking soon."

Taylor then proceeded to introduce the song "The Chapeltown Rag", which was released as a single last November. The track, as well as the rest of the new SLIPKNOT album, was produced by Joe Barresi, who has previously worked with AVENGED SEVENFOLD, QUEENS OF THE STONE AGE and CHEVELLE, among many others.

SLIPKNOT kicked off the 2022 iteration of its "Knotfest Roadshow" tour on March 16 at the Fargodome in Fargo, North Dakota.

The "Knotfest Roadshow" tour is taking place over two legs, both headlined by SLIPKNOT. The first leg featured special guests IN THIS MOMENT and WAGE WAR. The second leg features special guests CYPRESS HILL and HO99O9. The first leg of the 38-date run, produced by Live Nation, wrapped up in Vancouver, British Columbia, Canada on April 17. The second leg kicked off on May 18 in University Park, Pennsylvania and will conclude on Sunday, June 18 in Chula Vista, California.