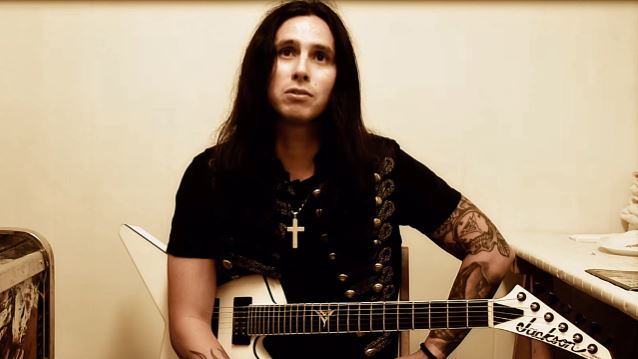 Spain's TNT Radio Rock recently conducted an interview with Greek guitar virtuoso Gus G., well known in rock and metal circles for his work as Ozzy Osbourne's guitarist and as leader of his own band FIREWIND. You can now watch the chat below.

Asked what it has been like working with Ozzy for the past few years, Gus said: "He's a very, very cool guy — very laid back, very funny. I think he's exactly the way people see him — you know, the way they know him from the TV shows. He's a funny guy, he's kind of clumsy, but he's also a smart guy. And it's just great to be around that guy. I mean, honestly, if he's in the room, it's just great to be a fly on the wall and listen to the stories from the past; it's just amazing."

Ozzy told Metro in a recent interview that his plans following the end of SABBATH's current farewell tour include getting to work on a new solo album. Ozzy explained: "I'm currently playing around with some song ideas. I have a few things jotted down, and once BLACK SABBATH is off the road, I will be heading into the studio with my band to get the songs recorded. Once it's all in the can, you can be sure to see me back on the road again."

Ozzy and his wife/manager Sharon have both said that Ozzy will carry on with his solo career after SABBATH plays its final shows in February 2017, although Sharon has hinted that the 67-year-old Ozzy may retire completely by the age of 70.

Ozzy has not released an all-new solo album since "Scream", having spent the last few years touring with SABBATH and recording that band's "13" album.