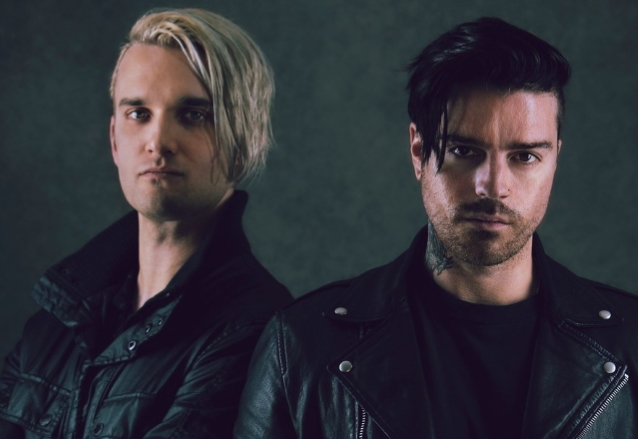 HALESTORM drummer Arejay Hale spoke to the "Thunder Underground" podcast about KEMIKALFIRE, the side project he recently launched with LIT drummer Taylor Carroll. Regarding how the new band came together, Arejay said (as transcribed by BLABBERMOUTH.NET): "[Taylor and I are] old friends. I've known him back when he was playing drums for a band called PILLAR. And we met at the Mall Of America in Minnesota when he was in his bus and we were in our R.V. And he just came over and knocked on the bus and he was, like, 'Hey, you guys are in a band?' And we were, like, 'Yeah. You guys are in a band too? Cool. Come on in. Have a beer. Let's hang out.' And we just never lost touch. We both lived in L.A. for a little bit, so we would hang out there. And then the pandemic hit and we got back in touch and we just wrote… Honestly, we were just looking for anyone that wanted to write with us. We had to stay busy, so a lot of Zoom writing sessions with other writers. And we just realized, 'Man, we have a really good chemistry writing music together,' and we both kind of pick up where each other lacks, in a sense; we have a great creative partnership. And not only that, but he's also a really talented producer as well — and multi-instrumentalist. So, as a songwriter, I just felt really glad that I could just put on my creative hat and let him do more of the mechanical work with the song ideas that I would present to him."

Regarding the progress of the KEMIKALFIRE songwriting sessions, Arejay said: "We're still writing, but we are planning on releasing some music soon, because everyone is chomping at the bit. We launched our social media platforms because, obviously, in this day and age, one of the main goals is to just kind of build your online following, but we quickly realized that as soon as we launched the social media platform, sure enough everybody said, 'Where's the music? Where's the music? I wanna hear it.' The demand for people to wanna hear music. We were, like, 'Oh, okay.' [Laughs]

"So, we are still in the process of putting an album together and we're still writing the album, but we have a couple of songs that are already finished," he explained. "So we're thinking, like, well, we have some strong material. Why don't we just put it out there, just to kind of satisfy the curiosity, while people are really curious, before it kind of starts to cool off. So that's our goal now, is to get a song out hopefully really soon. So I'm excited."

As for KEMIKALFIRE's musical direction, Arejay said: "It's different. It's much more aggressive than HALESTORM. I'm doing a lot more singing and a lot more crazy drumming. It kind of throws back to our punk roots; there's punk elements in there… There's moments where it's heavier; there's also moments where it's a little bit more melodic, a little more soaring. And there's moments where it has really stark punk roots start to kind of show through, which is kind of what Taylor and I were raised on. We love punk drummers, so when we're writing the stuff, a lot of that comes out just because that's just kind of really fun stuff to write for us.

"Yeah, it's different than HALESTORM, but it's also easily digestible," he clarified. "I think the average HALESTORM fan could hear it and be, like, 'Oh, okay. I get it. This works.' 'Cause obviously your personal writing style seeps into everything that you're a part of, so you'll probably hear HALESTORM elements in there as well, from my end."

Asked which instruments he and Taylor are handing in KEMIKALFIRE, Arejay said: "He's playing guitar and singing, and I'm playing drums and singing. But we're thinking maybe… We both can play both, so we're, like, 'Maybe we should trade off and do some…' He's also an insane drummer; he plays with LIT now, the band LIT, and we love LIT. But we also have a couple of songs where he was, like, 'Hey, you wanna play piano?' And I'm [like], 'Sure. Why not?' So we might switch some things up for our live show, which we're excited about. That's the dream. He and I personally are just, like, 'Man, I can't wait until we can play a live show. It's gonna be so much fun.'"

Arejay also talked about a possible timetable for releasing the first music from KEMIKALFIRE, saying: "Well, here's the frustrating part, is that COVID and the lockdown, we're still feeling remnants of that — on the business end, behind the scenes, which a lot of people don't see. And everything takes a lot longer now; what used to take three days now takes three weeks. So it requires an incredible amount of patience for us to get anything out there.

"We're hoping that we'll get something out this year," he continued. "Realistically though, I feel like it's probably no later than next year, I'm hoping. And I hope we get to put some live performances on the books, just so we're able to also broadcast to the Internet that we're a real band and 'here's what we fucking do.' [Laughs]"

When Arejay and Taylor first announced KEMIKALFIRE's formation earlier this year, they wrote in a statement: "We are KEMIKALFIRE! You may know us from HALESTORM and LIT, but we’re also 2 drummers, singers, songwriters, producers and long-time friends. We’ve finally joined our creative strengths, seizing our opportunity to create pure, honest and unbridled music for nobody but ourselves in hopes of helping anyone get through their own life obstacles. It feels good to finally share this project with you guys, and it’s going to feel even better to get going. We have some great stuff coming your way, stay tuned."

We are KemikalFire! You may know us from Halestorm and Lit, but we’re also 2 drummers, singers, songwriters, producers and long-time friends. We’ve finally joined our creative strengths, seizing our opportunity to create pure, honest and unbridled music for nobody but ourselves in hopes of helping anyone get through their own life obstacles. It feels good to finally share this project with you guys, and it’s going to feel even better to get going. We have some great stuff coming your way, stay tuned.
-Arejay & Taylor

Posted by KemikalFire on Tuesday, October 11, 2022

We love seeing the world from behind the drum kit, but we’ve got so much more to say. We set out to make this band a...

The man behind the madness!! We’ve been creating something rad…dare we say magical?! with our friend Scott Stevens, and...

Posted by KemikalFire on Thursday, July 7, 2022