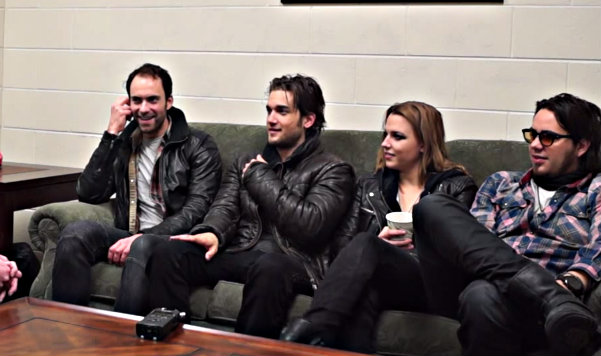 Cutter of the Razor 94.7 radio station in Wisconsin conducted an interview with HALESTORM before the band's November 20 concert at the Resch Center in Green Bay, Wisconsin with country superstar Eric Church. You can now watch the chat below.

HALESTORM has finished recording the hugely anticipated follow-up to 2012's chart-topping "The Strange Case Of…" The Grammy Award-winning hard rock band was working in Nashville with producer Jay Joyce (Eric Church, CAGE THE ELEPHANT),with the as-yet-untitled third album slated to arrive in 2015.

Asked about a possible release date for the new CD, HALESTORM lead singer Lzzy Hale said: "That's what we're discussing this week with our label. There's half of everybody that wants everything to be out right now, and then half of everybody was, like, 'No. We should be patient and make sure…'" I'm not sure where I stand with that. 'Cause, obviously, I'm very impatient. But I also kind of want everything to be done right."

As previously reported, HALESTORM is set for a second run supporting Eric Church on his blockbuster "Outsiders World Tour". The new dates begin January 8 at New Orleans' Smoothie King Center and then continue through early February. The "Outsiders World Tour" carries on the phenomenal pairing of HALESTORM and Eric Church, a collaboration begun when the country superstar teamed with HALESTORM frontwoman Lzzy Hale for a show-stopping duet performance of his hit single "That's Damn Rock & Roll" on this summer's 2014 "CMT Music Awards".

HALESTORM will release a vinyl edition of both of their previously released covers EPs. "ReAniMate: The CoVeRs Collection (2011-2014)" will be available on December 2 via the band's webstore.