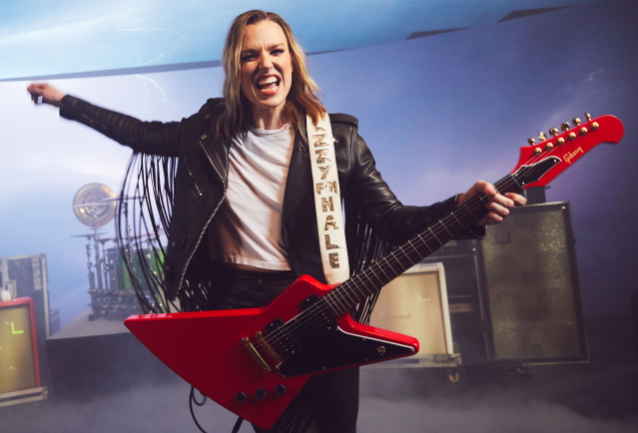 In a new interview with the FM99 WNOR radio station, HALESTORM frontwoman Lzzy Hale recounted some of her experiences meeting her musical heroes. She said (as transcribed by BLABBERMOUTH.NET): "I've never had a really bad experience meeting any of my heroes. Sometimes it was a little surprising. None of them were detrimental. One of them, I got to meet Tom Keifer from CINDERELLA, and we've since then become friends; we've done a bunch of duets and everything. But he was the guy that guy literally got me into guitar and singing the way I do. When I was a kid, I was obsessed with [CINDERELLA's] 'Night Songs' album; that was like my 'boy band.' It was in the '90s, and nobody understood it, but it's, like, 'I love this band so much.' He blew me away personality-wise — I mean, just made me feel like family from the get-go. Same thing with Ronnie James Dio. I only got to meet him once and he blew me away with just his demeanor. And then, on the surprising end of it, and this is not a bad thing, but I just got to meet Ann Wilson [from HEART] for the first time a couple of weeks ago, and it was such a beautiful moment, but she's so quiet — she's so just calm and subdued and is just happy to be there. And I was picturing in my mind that because of her powerful voice — I mean, I wouldn't be the singer I am today without her — I was expecting something a little bit more energetic and lively, and she's just cool as a cucumber. So that was just surprising, like, 'You're so loud when you sing but you're so quiet when you talk.' So that was kind of cool — surprising, but, again, not super detrimental."

Hale continued: "I always recommend meeting your heroes because you get to almost see that reflection of yourself and you get to really kind of just put the puzzle pieces together as to why you are the musician that you are today when you meet your heroes. So I never really shy away from that.

"One of the funniest ones was Joan Jett, because she was screwing with me," Lzzy revealed. "My bandmates had gotten me, years ago, one of her signature Melody Maker guitars, and so I brought it to the show that we were opening up for her. And I'm like, 'Hey…' I was all fangirly. I'm, like, 'Hey, would you sign my guitar?' And she looks at me and she looks at the guitar, and she's, like, 'Oh, I don't sign guitars.' And immediately I'm, like, 'Oh, that's okay. You don't have to.' And she's, like, 'I'm screwing with you. Give me the guitar.' And I'm, like, 'Okay. Phew.'"