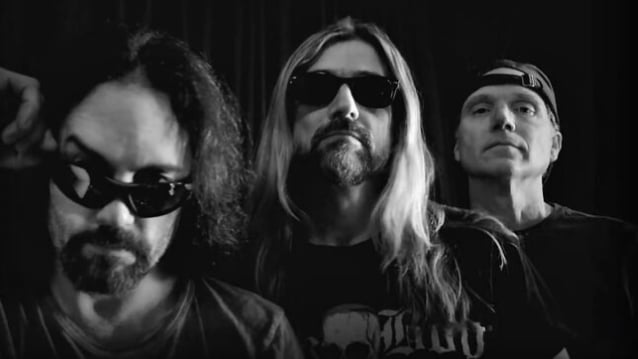 The clip was edited by Menza himself and features the trio in an all-out original, free-for-all intense heavy jam session.

The unnamed trio was assembled by Menza and LoMenzo in 2014, and later on joined by Poland to handle rhythm and lead guitar.

Before joining forces with Poland, Menza and LoMenzo released two demo versions of their cover of the METALLICA classics "Creeping Death" and "Motorbreath" with a guest appearance by guitarist/vocalist Davor Garasic from the Croatian thrash metal band SUFOSIA.

Menza, Poland and LoMenzo's first jam session took place on November 1, 2014, at Menza's Disintegrator Studios in Studio City, California, where they cracked through some of the old MEGADETH catalog along with some of their favorite METALLICA and LED ZEPPELIN songs.

Regarding the project's musical direction, which was described by some as LED ZEPPELIN meets METALLICA," Nick said: "It's got some elements of that, but I'd say we're just so far beyond everything that's been heard already. It's gonna be a conglomerate of styles. It's gonna be what we like to do best. Have fun and play. Our material is gonna be really out there, It's gonna be different. It's gonna pumped, it's gonna be heavy, but it's gonna be us."

The trio then rehearsed handful of times before disbanding later that year due to other musical commitments, Menza went on to join Poland's band OHM:, and was playing with the group live on stage when he died behind his drum kit of natural causes in May 2016.

The unnamed project will be a highlight in the recently announced official Menza documentary film "This Was My Life - The Story of Nick Menza", featuring video footage and audio recordings of Menza himself discussing the project's rhythm section, future recording and touring plans.

The film will be the first-ever film to memorialize Menza's legacy and celebrate his life exactly how it was. It is described in a press release as "an unflinching exploration into the life of one of the most successful thrash-metal drummers of all time, authorized by the Menza family. From his childhood all the way through to the end of his life including a true blow-by-blow account of the repeated failed attempts of the classic 'Rust In Peace' lineup."