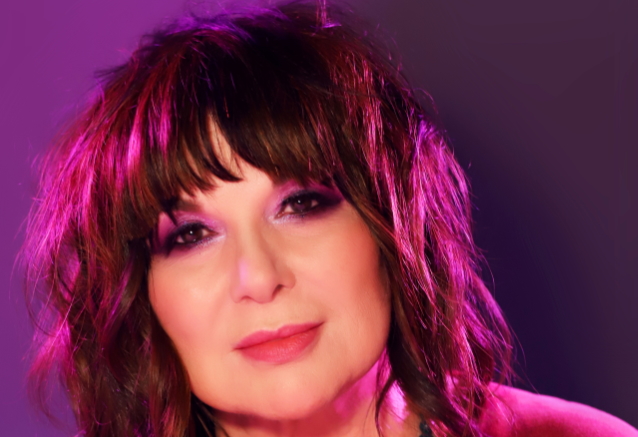 HEART's ANN WILSON: 'I've Always Had A Really Difficult Time Accepting The Idea That There Is A Single Reality'

HEART singer Ann Wilson is the featured guest on the latest episode of the "Hardcore Humanism With Dr. Mike" podcast. Ann talks with clinical psychologist and life coach Dr. Mike Friedman about coping with feelings of emptiness, how she approaches songwriting and how she realized she wanted to pursue her authentic path in life.

Ann says in part (as transcribed by BLABBERMOUTH.NET): "There've been a few times in my life when I've come really close to the edge of completely losing track of what we call reality — just because I've got this huge, broad imagination that's always busy. For one thing, I've always had a really difficult time accepting the idea that there is a single reality. When I was a kid, I even went, 'What? What reality are they talking about? There's hundreds of 'em and they're all interconnected. Why is one more acceptable or more real than any other one?' For instance, why is the dream state considered to be less than waking state? Why do people go, 'Well, you should get up and get out of bed because you're wasting your life just dreaming all the time.' The dream state, I think, is just another part of our consciousness; it's just another room.

"So, yeah, I've had lots of times when I just could not agree with what I was being told was the right way to be," Ann continues. "But I think of what it was like in high school, for instance, and sure, I was like a little loner art student kid who just hung out with the other loner art student kids, and was not popular, was not a cheerleader or a straight-A student or anything like that. Those were some of the times when I realized that, 'Boy, I'm super different and I just cannot fake it to be part of this reality.' More people had that feeling than let on, I think, and they make a decision at some point that they're gonna fake it until they make it in reality or they're gonna be outliers."

Wilson's new album, "Fierce Bliss", was released on April 29 via Silver Lining Music. The LP contains 11 perfectly weighted and selected songs ranging from Wilson's own co-penned originals to covers and collaborations. Wilson brings new life and verve to classic songs, such as QUEEN's "Love Of My Life", EURYTHMICS' "Missionary Man" and Robin Trower's "Bridge Of Sighs". To cap it all, the album artwork comes from the mind and hands of celebrated fantasy artist Roger Dean, who aside from his work in fantasy art is also renowned for his YES sleeve artwork. GOV'T MULE guitarist Warren Haynes guests on "Gladiator" and "Angel's Blues", which also features GOV'T MULE's rhythm section, bassist Jorgen Carlsson and drummer Matt Abts.

Wilson previously released a covers record, "Hope & Glory", in 2007 and followed it with a second album of cover songs, "Immortal", in 2018.

A proposed HEART tour fell through last year after Ann and her sister Nancy failed to agree on which backing band to use. Ann wanted her guys, Nancy didn't. But Ann now says that another HEART album, which would be the band's first since 2016's "Beautiful Broken", is a definite possibility, especially considering the fact that 2023 marks HEART's 50th anniversary.

HEART last toured North America in the summer of 2019.