HEART's NANCY WILSON To Sell Guitars And Other Music Gear

Reverb, the largest online marketplace dedicated to buying and selling new, used, and vintage musical instruments, in partnership with Definitive Authentic, announced today that pioneering rock guitarist Nancy Wilson will sell a collection of guitars and other instruments used throughout her career on Reverb. Beginning October 19, fans can shop the official Nancy Wilson of HEART Reverb shop and its collection of over two dozen items, including guitars, amps, and keyboards.

For nearly five decades, Wilson has been one of the world's most celebrated guitarists, with hits like "Barracuda", "Crazy On You", "All I Wanna Do Is Make Love to You" and more. Now, she's passing on the gear she's used along the way. The official Nancy Wilson of HEART Reverb shop will include a Gibson SG from the late '60s that Wilson says was her guitar of choice for live versions of the hit song "Barracuda". According to Wilson, the Bigsby-adorned SG was the foundation of her massive '80s-style riffs during the song, and the guitar became well known by HEART fans for the two Marine Corps stickers on the back.

"It's traveled really far with me and we've done a lot of stages and shows together, and you might recognize this Marine Corps symbol here that I used to flash after 'Barracuda' at the end of shows," said Wilson. "My dad was a military man, and there's pictures of me saluting at a lot of shows. This guitar is one true hero."

All gear in the official Nancy Wilson of HEART Reverb shop has been certified by Definitive Authentic, which works directly with world-renowned artists and more to protect, preserve, certify, and exhibit their artifacts. The shop features a notable collection of rare, vintage, and prototype guitars, as well as other gear that has traveled with Wilson all over the world, including:

* A pre-factory Paul Reed Smith 12-string prototype with a dragon inlay that is one-of-a-kind. "This is one of the coolest guitars I've ever owned," Wilson said. "It came with me all over the [latest] HEART tour. I played the first song of the tour on this guitar, 'Rockin' Heaven Down'."

* A 1957 Fender Stratocaster that's been on stages around the world. "It's got all the good dirt in the sound of it from the '50s," said Wilson. "There's something about the older models that have that dirty sound. It's because they're all grown up and are big characters."

* A late-'70s David Petschulat Mini Les Paul is only one of several made, according to Wilson. "It's very teeny tiny. It was on stage with me, and Howard Lee has had one, too. It's also the star of the cover of HEART's album 'Greatest Hits Live'."

* A Duncan Quattro from the mid-'80s that accompanied Wilson during many stadium shows. "During certain songs it was on a stand that I played along with a keyboard part," she said. "On other songs, it was the all-purpose dive-bombing '80s style guitar."

* A TV Jones Spectrasonic with a red and white finish with a Bigsby vibrato that was also often used to play "Barracuda" live frequently, according to Wilson.

Over the years, Reverb has helped dozens of artists get their music gear into the hands of fans, including Peter Frampton, Mike Campbell, T Bone Burnett, and more.

To preview the gear that will be available in the official Nancy Wilson of HEART Reverb shop and to sign up to be notified when the shop goes live on October 19, go to this location. 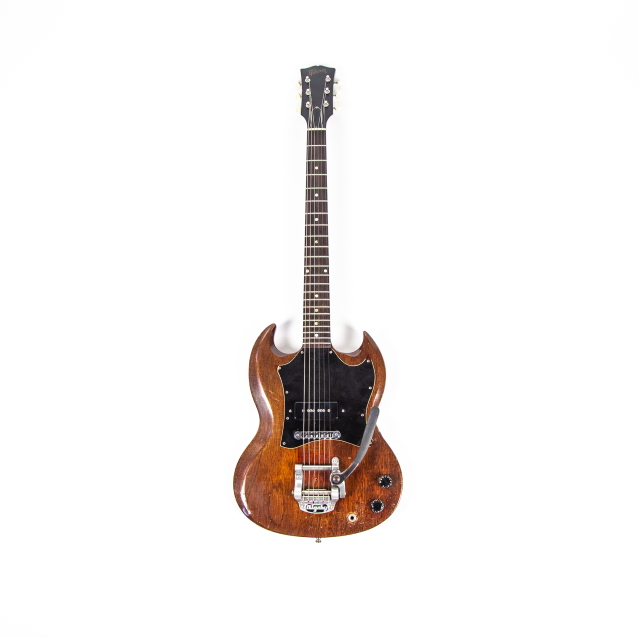