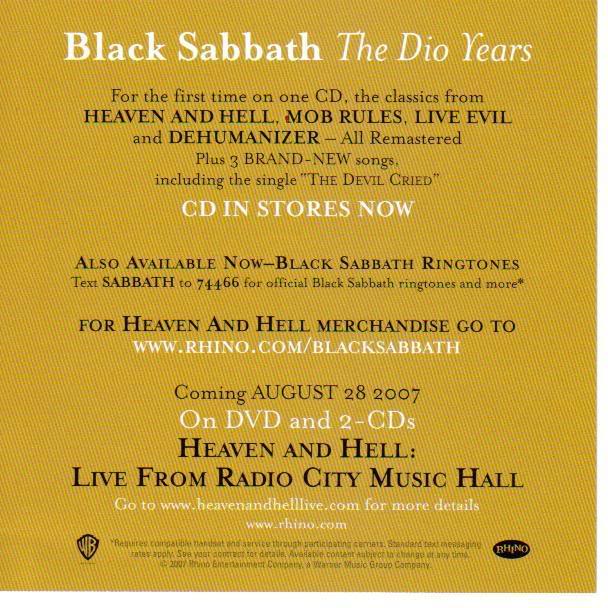 According to the flyer that came with the BLACK SABBATH "Live At Hammersmith Odeon" limited-edition CD which is currently being shipped via Rhino Handmade (the official release date is May 1),Rhino has set an August 28 release date for the HEAVEN AND HELL "Live from Radio City Music Hall" DVD and two-CD set. [View the flyer at this location.] As the title implies, both the DVD and CD packages will include HEAVEN AND HELL's (the band featuring BLACK SABBATH guitarist Tony Iommi and bassist Geezer Butler, singer Ronnie James Dio, and drummer Vinny Appice) performance on March 30, 2007 at the Radio City Music Hall in New York City. The group's setlist was as follows:

Check out pictures from the concert at Wire Image.

Launch Radio Networks reported in early April that the band's performance at the HEAVEN AND HELL DVD shoot was great, with some long-time fans calling it the group's best show ever, but things didn't go as smoothly behind the scenes as they could have. Lead singer Ronnie James Dio told Launch that New York City union issues reared up hours before the concert even began. "We didn't have enough time for a soundcheck because the union went, 'OK, time for a break,'" he said. "'But we've only done half a song.' 'Time for a break.' 'But we've got 15 minutes left.' 'We said, time for a break.' You know that way that goes. So, all in all, it was more difficult than it should have been — but it is a city show, and that's what you've gotta put up with."

There were plans to lengthen the setlist for Radio City, but having soundcheck cut meant the band couldn't properly rehearse. They were planning to add the new track "Ear in the Wall" that's on the new album "Black Sabbath: The Dio Years", which came out on April 3.

Several full-length video clips of HEAVEN AND HELL performing on March 13 at Rexall Place in Edmonton, Alberta, Canada have been posted online at YouTube.com. Check them out at this location.