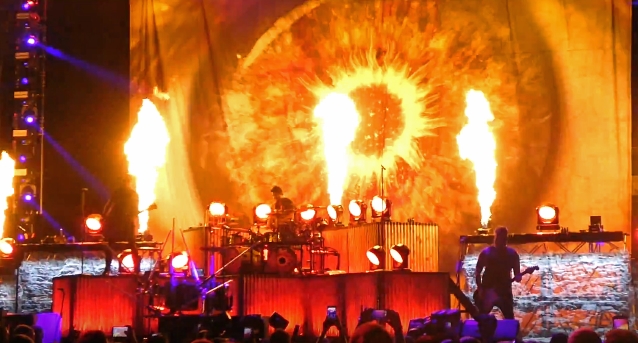 Fan-filmed video footage of BREAKING BENJAMIN performing a cover version of the METALLICA classic "Sad But True" on August 15 at the BB&T Pavilion in Camden, New Jersey can be seen below.

BREAKING BENJAMIN is continuing to tour in support of its sixth studio album, "Ember", which was released in April via Hollywood Records. The effort marks the first time frontman Benjamin Burnley got the other members of the band — guitarist Jasen Rauch (formerly of RED),guitarist/vocalist Keith Wallen (formerly of ADELITAS WAY),bassist/vocalist Aaron Bruch and drummer Shaun Foist — involved in the songwriting process.

"The guys in the band now, not to put anybody down, but the writing we had done with the old lineup, it was very limited and it was very unorganic to me," Burnley told The Herald-Journal. "I would have to take pieces and parts from things and make them fit into things that I already had. So with this band, on the writing aspect as well, the writing that those guys do is a lot more along the lines of the writing that I would do. We all kind of clicked that way."

Regarding the heavier musical approach on the new disc, Burnley, who also served as producer, told Guitar World: "The riffs are crazy, and the guitar sound is huge. People think there's tons of guitars on the tracks, but there really isn't. For the most part, it's just four rhythm guitars, and then we have little melody embellishments and leads. When you play the right parts and you space them out well, everything sounds bigger and bolder, so you actually have to do less."

Burnley also talked about how BREAKING BENJAMIN's live show has changed with the new five-man lineup, explaining to The Herald-Journal: "There are a lot of bands, they'll run [pre-recorded] tracks behind what they're playing. With the old [four-man] lineup, because we were sort of limited, I had to do that as well. No other guys in the band sang and there wasn't an extra guitarist. So there were some guitar parts that needed to be in there. There were some computer sounds, like samples and what not, that needed to be in there. We ran everything through a grid to like a click track. With this band, we don't run any click track and we don't run any [backing] tracks whatsoever. We use the technology in the right way as far as drum triggers are concerned, so we don't play to any tracks. So everything we're doing now is completely 100 percent live."