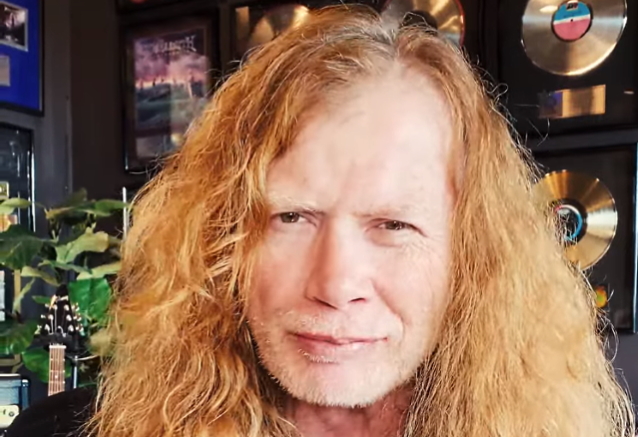 After he beat throat cancer in late 2019, MEGADETH leader Dave Mustaine enlisted Anthony Cmelak, a professor of radiation oncology who treated him, to co-write a song for the band's new album, "The Sick, The Dying... And The Dead!" According to Nashville Tennessean, Cmelak co-wrote "Dogs Of Chernobyl", a six-minute track loosely about animals left behind after the 1986 nuclear meltdown. Mustaine asked Cmelak on a Saturday morning if he would share some radiology experience for a song. He sent lyrics the following Monday and the band cut a track two days later.

"I think he wanted descriptive terminology on how your bodily functions would change after exposure to massive doses of radiation," Cmelak said. "He also wanted a flair of someone being left behind … I geared toward that and it came around very quickly."

Mustaine's cancer was found after he visited a specialist for lingering pain post-root canal. He began chemotherapy at Vanderbilt University Medical Center, adopting treatment that would eliminate the tumor without causing so much damage to his throat that he wouldn't be able to sing anymore.

"I just felt horrible for him because here's this guy who has been on stage in front of 10s of thousands of people," Cmelak told Nashville Tennessean. "To see him change from being scared [not] about his career, but his life — to see him go through it day to-day — he seemed to take it in strides."

Mustaine was declared cancer free after 51 radiation treatments and nine chemotherapy sessions. He returned to the stage in early 2020 on a European tour where MEGADETH was the support act for FIVE FINGER DEATH PUNCH.

Dave told Kerrang! magazine about the lyrical inspiration for "Dogs Of Chernobyl": "'Dogs Of Chernobyl' is a metaphor for abandonment. The lyrics describe the meltdown at the reactor and the poisoning that happens after that, but for me it was really just another twisted love song. It's springtime. Everything has stopped in the world. She can't be found, but he still sees her face everywhere that he turns. It progresses from the first chorus where he's seeing her face to a double chorus where he's in Chernobyl and feeling the effects of radiation. Does it feel oddly timely to be referencing Chernobyl this year, with all of the horrible events in Ukraine? No, I'm not trying to take any kind of advantage of people in an unfortunate situation. I think that'd be very vulture-like. That's just not me: I never prey on other people's misfortune."

Three years ago, Mustaine told Rolling Stone magazine that the incredible outpouring from his fans and peers after his cancer diagnosis "came as quite a surprise." He explained "A lot came from people that I knew but I didn't know cared. Most notably, I got a text message back from my old brother, James Hetfield, and I was so, so happy to hear from him. Contrary to what anybody says and contrary to any of the act that we put on, I love James and I know that James loves me and cares about me. You can see that when the moment of truth is here and I'm telling the world that I've got a life-threatening disease. Who comes to stand next to me? James.

"And I got a text message from Ozzy, and one from Paul Stanley," he revealed. "It was great to get one from Ozzy [Osbourne]; I didn't expect it from Paul Stanley. That was super bitchin' because in the beginning, when KISS first came out, I was just a kid and I loved them.

"I'm really grateful for everybody. Even the people who have a hard time with my behavior and my big mouth, I'm just so grateful for them showing care for me. Like they say, at the end of the day, all we've got is each other here in this crazy metal community."

According to Mustaine, he also spoke with IRON MAIDEN singer Bruce Dickinson, who was diagnosed with a cancerous tumor on the back of his tongue eight years ago. "[Bruce] said when he had his disease, after his treatment was done, he was told that he needed between three to six months of rest," Dave said. "He said to me that he didn't listen and had a little bit of trouble, so then he realized he needed to listen. So he did and his voice came back stronger than ever. I care so much about Bruce; he was another really supportive brother to me during this whole thing. He explained to me how he did it, and it really helped. I'm just looking forward to if there's ever a circumstance where this happens to another one of my peers, I can return the favor and help them. It's a tricky disease, but they've got doctors all over the place that are figuring this shit out."