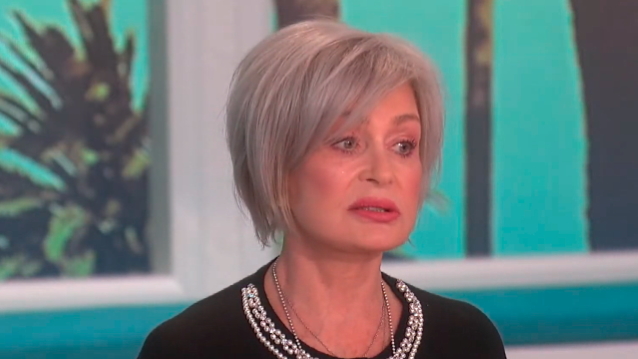 How Would You Define A 'Rock Star'? SHARON OSBOURNE Weighs In

During a live chat with Grammy-nominated producer Linda Perry on Friday (April 24),Sharon Osbourne was asked how she would define a "rock star." She responded (see video below): "It's somebody that just has that charisma. You've gotta have that charisma, you've gotta have talent. Nothing of this works without talent. There are so many people with great charismas, but they don't have the talent. So you've got to have that combination of talent and great charisma. And you walk in a room and every fucker in that room knows you're in that room. And you can walk on a stage, do nothing and the crowd goes insane."

Sharon, who for roughly 40 years has been the management brain behind her husband Ozzy Osbourne's musical talents, was also asked if being married to her artist made her a better manager or if it compromised her position or decisions. She responded: "It's a very hard line to walk — it's a very hard line — because Ozzy would always say to me, 'Are you talking to me as my manager or my wife? Are you caring of me of a manager or a wife? Do you want me to do this when you know I've got the worst cold in the world?' So, it's very hard. It is hard, but yet when you love someone so much, and to have the career that Ozzy's had and to see things that affect him as an artist, you get such an insight into artists and how they all react, because they are… I honestly believe when I say that vulnerability. I think it's very easy to hurt artists; they're very vulnerable."

Sharon revealed in March that Ozzy was forced to cancel his trip to Switzerland to see a doctor who specializes in treatment of Parkinson's disease.

Ozzy was scheduled to travel this month for radical treatment to help him live with his progressive neurological condition. But Sharon said on "The Talk" that as movement around the world has become more restricted due to the coronavirus pandemic, Ozzy had no choice but to call off the trip for now.

Osbourne was first diagnosed with Parkinson's disease back in 2003. The legendary singer disclosed that he was stricken with the disease in January during an appearance on "Good Morning America".