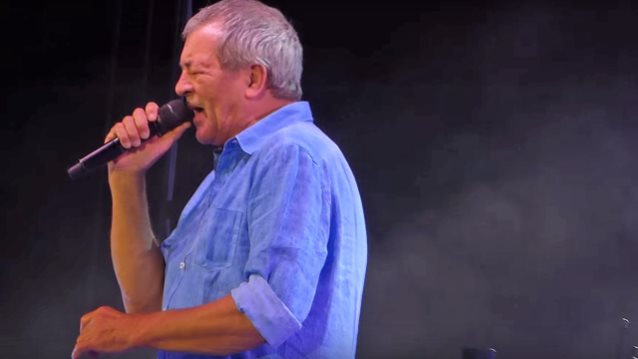 In a brand new interview with Germany's Bild, Ian Gillan spoke about his relationship with Ritchie Blackmore nearly twenty-years after the former DEEP PURPLE guitarist famously told the Swedish TV program "Metal Magazinet" that he would one day attack Gillan in the back alley while they were both on tour with the band.

"I don't think Ritchie's ever grown up, really," Gillan said (see video below). I mean, I grew out of all that stuff when I was forty years old. I should have done it when I was twenty. But you're cushioned from life in this job; you're not brutalized by it quite so much as you are in other ways of life.

Gillan and Blackmore were two of the DEEP PURPLE members who were inducted into the Rock And Roll Hall Of Fame in 2016 — despite being eligible for induction since 1993. The band had long been overlooked, though they had been considered in 2013 and 2014 before ultimately getting voted in last year.

Gillan told Bild: "Yes, [Ritchie and I have] made our peace. I think pretty much… We're in communicaton now. We've solved a lot of difficulties that were nothing to do with the direct relationship — old management problems that were dividing us and things like that; boring stuff, but important nonetheless within the group. So that's all been solved now. So there are message going back and forth, and I can sense goodwill much more than in the past.

"I don't think anyone has ever said anything disrespectful about Ritchie's ability to play," he continued. "He was a fantastic, wonderful showman and a great, articulate guitar player — very lyrical and expressive. And so we were fortunate to have him in the group. I mean, to have him and Jon Lord and Ian Paice and Roger Glover in a band that is primarily an instrumental band… No matter what I do, I've always recognized that DEEP PURPLE is primarily an instrumental band. That's where all the music comes from in rehearsals — it all stems from the music.

"So, yeah, I wish Ritchie good luck — always have done, really. And we'll see. It's coming to an end now anyway."

When asked if he could ever imagine himself working with Blackmore again, either as part of DEEP PURPLE or another project, Gillan said: "I have got a good imagination. [Laughs] But, you know, when you get divorced, it's hard to go back. You must always respect and enjoy the memories and the nostalgia, but would you do it again? Probably not. No. Just enjoy what happened, because it could so easily be damaged by something like that. And I think if I'm gonna be part of DEEP PURPLE coming to an end, then I've got a lot of other things to do. I would quite happily sit with a couple of beers and do my writing and maybe do some solo stuff with other musicians. But [with Ritchie]… no. No."

Despite Blackmore being a no-show at last year's Rock Hall, he was given several shoutouts during the induction speeches of the DEEP PURPLE members in attendance. In addition, METALLICA drummer Lars Ulrich, who inducted DEEP PURPLE into the institution, praised "Ritchie fucking Blackmore" for one of the most memorable guitar riffs of all time on "Smoke On The Water".