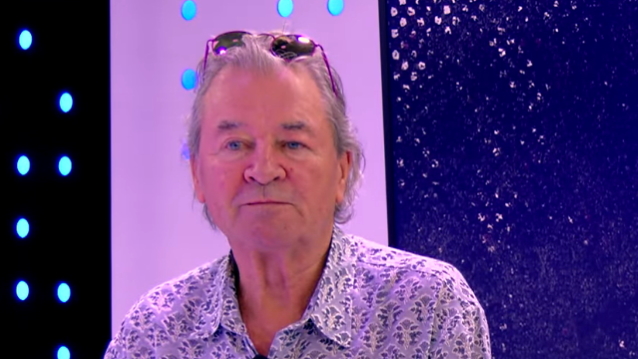 IAN GILLAN Was 'Disappointed' With 'Final Production Mix' Of BLACK SABBATH's 'Born Again': 'I Threw It Out The Window Of My Car'

In a new interview with Spain's RockFM, DEEP PURPLE singer Ian Gillan was asked if it's true that he broke the sole BLACK SABBATH album he appeared on, 1983's "Born Again", when he first got a copy of it. He responded (as transcribed by BLABBERMOUTH.NET): "I didn't break it. I threw it out the window of my car. [Laughs]

"Look, I was disappointed," he explained. "I didn't have the mentality of all the guys in BLACK SABBATH. I loved it. I had a fantastic year; it was insane. But when we finished the mixes… I still have a cassette at my home of the monitor mixes of 'Born Again', and it sounds fantastic — just on a cassette. And that's the last thing I heard in the recording studio. When I heard the album, I went, 'What is this?' The bass rumble was a bit too much for me.

"There's a famous line in a famous movie called 'This Is Spinal Tap' that has two or three references to BLACK SABBATH in it," Gillan added. "And I don't know where these may have come from [laughs], but one of them was 'This album in unplayable on American radio,' because of the bass end. And so it was — unplayable on the radio.

"I was disappointed in the final production mix," Ian clarified. "I don't know what happened between the studio and the factory, but something happened. So that was a disappointment. Having said that, I love some of the songs on there. And 'Trashed' is one of my favorite rock and roll songs of all time, and even more so because it's a completely true story. [Laughs]"

Gillan also reflected on his touring activity with SABBATH, saying: "I was with BLACK SABBATH for a year and I sang Ozzy Osbourne songs as well as the songs from 'Born Again'. And I never felt right doing that. It was great — I could sing them okay — but I didn't sound like Ozzy. There was something not quite right."

Following the departure of lead singer Ronnie James Dio and drummer Vinny Appice after the studio mixing of the "Live Evil" album, BLACK SABBATH was once again on the lookout for yet another lead vocalist to fill the significant void left at stage front. The band turned to Gillan.

The resultant album and live touring certainly made for one of the more curious associations in the world of heavy metal. Much of this era of BLACK SABBATH has passed into rock folklore and was actually the source for the material used in the rockumentary movie "This Is Spinal Tap". From the replica stage production of Stonehenge, which was too large for some of the venues on the world tour, to the employment of a dwarf to dress up and play the part of the "devil-baby" from the LP front cover, the world of BLACK SABBATH took on a distinct air of the surreal.

While the well-received "Born Again" album and live dates succeeded in stoking the embers and kept the SABBATH flames burning, this would ultimately be a marriage built more on friendship and respect as opposed to any long-standing and compatible musical association. After one tour, Ian Gillan would eventually bid farewell and re-join his old sparring partners for the Mk. II reunion of DEEP PURPLE and leave BLACK SABBATH once more gazing into the crystal ball hoping the face of yet another lead vocalist would reveal itself.

For Iommi, Geezer Butler, Ward, Gillan, and keyboardist Geoff Nicholls, work would swiftly commence in May of '83 at the Manor Studios in the village of Shiptonon-Cherwell, Oxfordshire. Produced by BLACK SABBATH and co-producer Robin Black, who had also worked on 1975's "Sabotage", 1976's "Technical Ecstasy", and 1978's "Never Say Die", SABBATH's eleventh studio release would represent a radical departure from the gloomy atmospherics and blackened lyricism that had forged their identity and spawned innumerable descendants.

Gillan's approach to songwriting bespoke a lighter-hearted approach to what had, until then, been the primary concern of Butler. Album opener "Trashed", for instance, was inspired by Gillan's boozed-up race around the Manor's grounds in Bill Ward's car that ended in near-catastrophe and a wrecked vehicle. "Disturbing The Priest" was the result of a door in the studio having been left open during playback, and a local vicar appearing in the doorway asking for the volume to be turned down as it was disturbing choir practice in the adjacent village.

For all of its off-kilter appearance however, "Born Again" was still SABBATH through and through. Musically twisted and possessed with more than a whiff of brimstone, the album is a thrilling glimpse into an alternative world.

In a 2018 interview with SiriusXM, Gillan said that "Born Again" began with a bender at the Bear Inn, one of the oldest pubs in Oxford, England.

"How it started is was just 'cause we got drunk together one night," the DEEP PURPLE frontman said. "I went for a drink with Tony and Geezer, and we ended up under the table. And I can't remember much more that happened. But I got a call from my manager the next day saying, 'Don't you think you should call me if you're gonna make decisions like this?' I said, 'What are you talking about?' He said, 'Well, apparently you… I just got a call. You agreed to join SABBATH.' So that's how it happened. I was at a kind of loose end anyway, having just finished with my own band and PURPLE not really being anything viable at the time. So we set a one-year plan, and it was to do an album and a tour. Nobody knew what was gonna happen, so we pitched up and I pitched my tent, literally, at the old manor in Oxfordshire. And we made an album. I didn't see much of 'em. They were night people, so they slept all day and worked all night. I got up in the morning, cooked my breakfast, went to the studio to hear what they had recorded the night before and write a song over it. And that's how the album was made."

Gillan went on to describe the making of "Born Again" as "a challenge for me. It was a bit like doing [Andrew Lloyd Webber's rock opera] 'Jesus Christ Superstar' or singing with [opera singer Luciano] Pavarotti; it's just something completely different," he explained. "But Tony is such a great writer. You know what to expect with Tony. There's no multidirectional approach. He is the father of everything that came out of Seattle, I believe. He's just very direct, and that's how he evolved from the early days.

"I found it very easy to sing and write songs with [Tony]," Ian continued. "And we had a couple of good ones. There was always a narrative. My favorite song from that album is 'Trashed', which was a true story about a racetrack and too much drink and spinning a car and crashing it and going upside down. It was exciting times."

The second track on "Born Again" was a brief instrumental called "Stonehenge", and on SABBATH's 1983 tour, the band hilariously had to shelve a Stonehenge stage concept because the scenery was much too big to use.

"We had a production company called Light And Sound Design; they were in Birmingham, where the band was based," Gillan recalled. "And after rehearsal one day, we had a kind of meeting to go the office, and as we were walking through these corridors, one of the guys said, 'By the way, anyone got any idea of a concept for a stage set or anything?' And Geezer Butler said, 'Yeah. Stonehenge.' And the guy said, 'Wow! That's great.' He said, 'How do you visualize it?' And Geezer said, 'Well, lifesize, of course.' We didn't quite go lifesize, but it was about two-thirds. And we could never get it all up on a stage. We played some huge arenas, and places, stadiums, and you couldn't get it [up there]. So there are parts of it, there are monoliths that are all lying around in docklands somewhere and are spotted around the world, as far as I know."

A longtime treasure among hardcore SABBATH fans, "Born Again" was re-released in the spring of 2011 as a special two-CD set featuring a 1983 live performance from the Reading Festival.

At the time of its initial release, "Born Again" was a commercial success. It was the highest-charting BLACK SABBATH album in the United Kingdom since "Sabbath Bloody Sabbath" and became an American Top 40 hit. Despite this, it became the first BLACK SABBATH album to not have any RIAA certification (gold or platinum) in the U.S.

Last year, Iommi told the French newspaper Le Parisien that he was thinking about remixing "Born Again" now that he has located the album's original tapes.