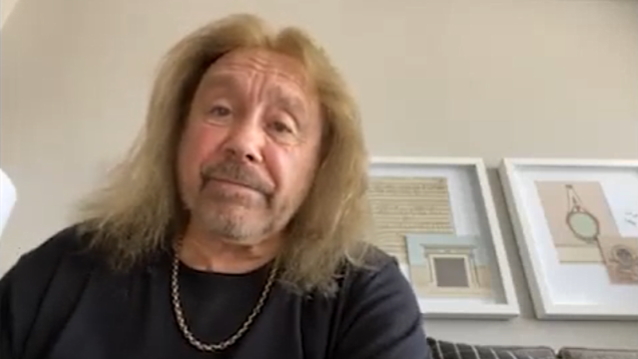 In a new interview with Brian Edwards, founding JUDAS PRIEST bassist Ian Hill spoke about the fan and media response to the group's music and visual presentation when he and his bandmates first came on to the scene in 1969 near Birmingham, United Kingdom. He said: "It wasn't metal back then. It was something that evolved over probably 10 years. It was probably [PRIEST's 1980 album] 'British Steel' when everything jelled… The music was always getting heavier as we started out. The last thing we wanted to be was another blues band, because that was the big thing at the time; it was progressive blues and heavy blues and things like that. CREAM, FLEETWOOD MAC, FREE, even [Jimi] Hendrix — they were all blues-based, really, and we didn't wanna be another one of those; we wanted to be different. So we went on the heavier side of things — probably because of the area we were brought up in; very industrial — steel works and car factories, coal mines, it was all there. And we went from there. And it evolved over the years. In the early days, before we could afford stage clothes, there were satins and velvets and things like that, multi-colored shirts. And then, about 1980 and 'British Steel', everything jelled. We had been wearing leather for a couple of years before then. The music sort of focused at that point; we were on our track then."

Hill is the sole remaining original member of PRIEST, which formed in 1969. Singer Rob Halford joined the group in 1973 and guitarist Glenn Tipton signed on in 1974. Rob left PRIEST in the early 1990s to form his own band, then came back to PRIEST in 2003. Founding guitarist K.K. Downing parted ways with the band in 2011, and was replaced by Richie Faulkner.

Hill married Rob's sister, Sue, in 1976 and they divorced in 1984. Together they have a son, Alex, who was born in 1980. Hill lived in Florida while he was married to his second wife, Letitia. They had a daughter with the same name.

Tipton was diagnosed with Parkinson's disease eight years ago — after being stricken by the condition at least half a decade earlier — but announced in early 2018 he was going to sit out touring activities in support of PRIEST's latest album, "Firepower". He was replaced by "Firepower" producer Sneap, who is also known for his work in NWOBHM revivalists HELL and cult thrash outfit SABBAT.