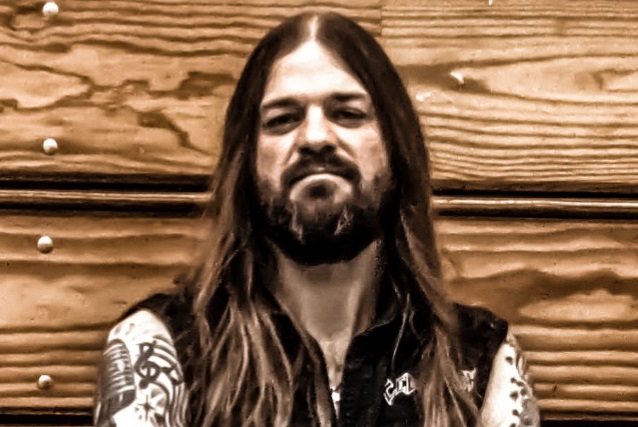 ICED EARTH Frontman On SLAYER Calling It Quits: 'It's Pretty Crazy That They Are Doing It'

ICED EARTH frontman Stu Block says that "it's pretty crazy" to know that SLAYER is planning to embark on a "farewell" tour.

Speaking to Metal Insider, Block was asked how he felt about the Tom Araya-fronted outfit and other bands calling it quits. "As far as SLAYER retiring and me taking the news, it's not like I was crying into my cereal, or anything like that," Stu said. "I'm not going to lie, right? But it's pretty crazy that they are doing it. But they have their reasons. And there's really good reasons behind it. Logical reasons — health reasons and all that kind of stuff. They've been doing it a long time. They've paved the way for a lot of bands, and I totally respect what they've done. For a person that's seen a band like that have the career that they have, and them just say, you know, it's time, it shows the writing on the wall. All these bands eventually do retire. But it does pave the way for other bands, and it's gonna… There's gonna be fans that are out there that are gonna want to fill that void, and they're gonna wanna go to more concerts, whereas like you know, the SLAYERs and the IRON MAIDENs and the JUDAS PRIESTs and all those bands, once they start retiring…

"When you go to the average concert, it's really expensive, you know average concert's are pretty expensive," he continued. "The average band is spending quite a bit of money to go to an IRON MAIDEN concert, you know. Whereas now they can actually be… If you have several of those mid-level bands that are actually still touring and stuff, they can actually go to more shows, they can buy their t-shirts, more of them, and they're able to support more… to put more money into it. So I think there's a really cool thing that'll happen, but it is saddening, of course. It sucks for those fans that have wanted… still wanna hear new SLAYER records and all that kind of stuff. It sucks, but they're humans too, and they have to know when to call it a day as well."

ICED EARTH is continuing to tour in support of its latest album, "Incorruptible", which came out last June via Century Media.