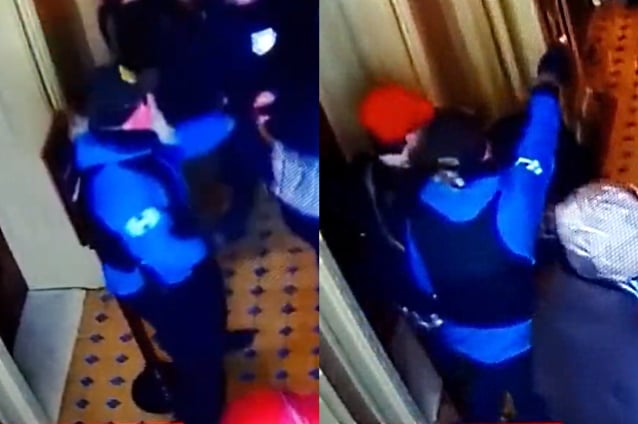 The clip in question, which was released by CNN on Monday (February 15),shows rioters charging through a breached entrance and engaging and pushing officers. A man resembling Schaffer can be seen near the front of the mob, wearing a blue hooded sweatshirt, a tactical vest and black leather fingerless tactical gloves, and pointing his finger while yelling at the officers. (See video below.)

Last month, Schaffer was arrested for his role in the riot at the U.S. Capitol. The 52-year-old musician, who resides in in Edinburgh, Indiana, is facing six federal criminal charges after he was accused of spraying a police officer with a pepper-based bear repellant during the insurrection.

Schaffer waived his preliminary hearing as well as his rights to an identity hearing and production of a warrant in late January in the U.S. District Court for the Southern District of Indiana, court documents state. He will soon be transported by a United States marshal to Washington, D.C. where government lawyers and Schaffer's legal team have mutually agreed to handle all proceedings.

Last month, government lawyers asked the judge to not offer Schaffer a bond when he goes in front of U.S. magistrate.