Z2 Comics has announced "In Flames: The Jester's Curse", a graphic novel celebrating the legendary Swedish melodic metal institution. The book expands the post-apocalyptic fantasy behind the quintet's world, following the band's grim mascot, Jesterhead, as he emerges from the Wasteland. He soon finds himself trapped in Dead Eternity — a distorted reality where worlds collide and nightmares thrive. The tortured figure attempts to recover his lost memories… but the devious Whoracle Queen wants him first.

"We're passionate fans of the comic book medium," IN FLAMES says. "We're proud to contribute to that tradition with 'The Jester's Curse'. This is your first descent into our dark fantasy universe, based around our trusty mascot — the Jesterhead! Get in and get lost!"

Overseen by Blake Armstrong, the graphic novel features writing from Armstrong, Ben Laverock and Scott Bramble, with art from Scott Dewey and Armstrong.

"'The Jester's Curse' has been my dream project for nearly a decade. After all these years, I believe we finally found the perfect artistic collaboration to give readers a book that lives up to the music and world of IN FLAMES," Armstrong explains. "The epic continuation that Scott Dewey and Ben Laverock have created is beyond what I could have imagined for this story, and I only hope it will connect with fans the same way IN FLAMES' music has connected with us."

"I've watched the development of this story, and have been a fan of this project for a long time," Z2 Comics editor Rantz Hoseley says. "When the opportunity arose for Z2 to publish the complete book, we didn't hesitate to partner with IN FLAMES to bring this wonderfully insane story to the fans!"

Founded in 1990 in Gothenburg, Sweden, IN FLAMES has spanned 13 LPs and 3 EPs to become one of the most prolific and innovative metal bands the world over. Consisting of members Björn Gelotte, Anders Fridén, Chris Broderick, Bryce Paul and Tanner Wayne, the quintet has been nominated for three Grammis, Sweden's most prestigious musical accolade, and have won two; netting the 2004 award for the "Hard Rock/Metal Album Of The Year" for 2004's "Soundtrack To Your Escape" as well as the same award for the LP "Come Clarity" in 2006. The band has sold more than 2.5 million records over the course of its career. The group will release its 14th studio album, "Foregone", via Nuclear Blast on February 10, 2023.

IN FLAMES is currently on tour in America with MESHUGGAH and will start its European run with AT THE GATES, IMMINENCE and ORBIT CULTURE next month.

Z2 Comics and IN FLAMES present "The Jester's Curse" in standard hardcover and deluxe hardcover editions. The deluxe hardcover will come with a print triptych by Blake Armstrong. Oversized platinum editions will come signed by IN FLAMES with an elegant slipcase and the triptych art prints. Z2 Comics will also exclusively release the single "The Great Deceiver" in a crystal-clear seven-inch vinyl with etched B-Side, limited to 500 copies, as well as a limited-edition Jesterhead action figure. All of items are set to release in spring 2023.

Preorder now at this location. 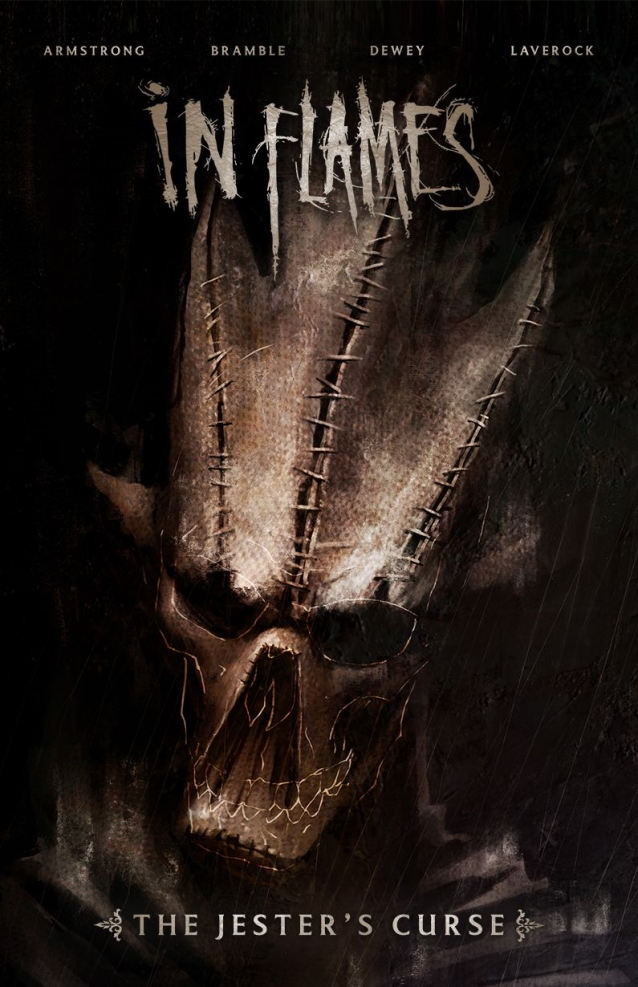 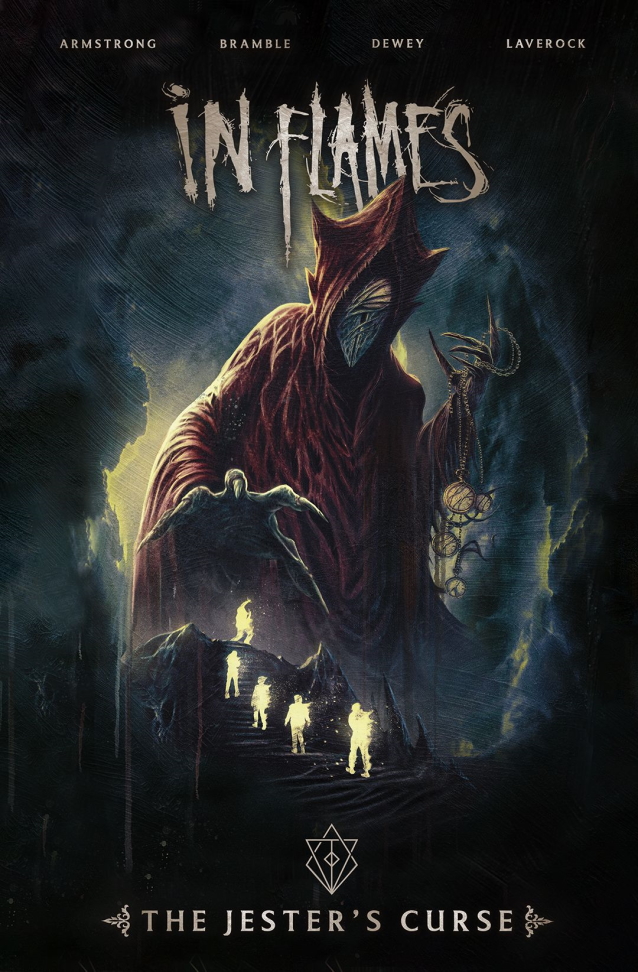 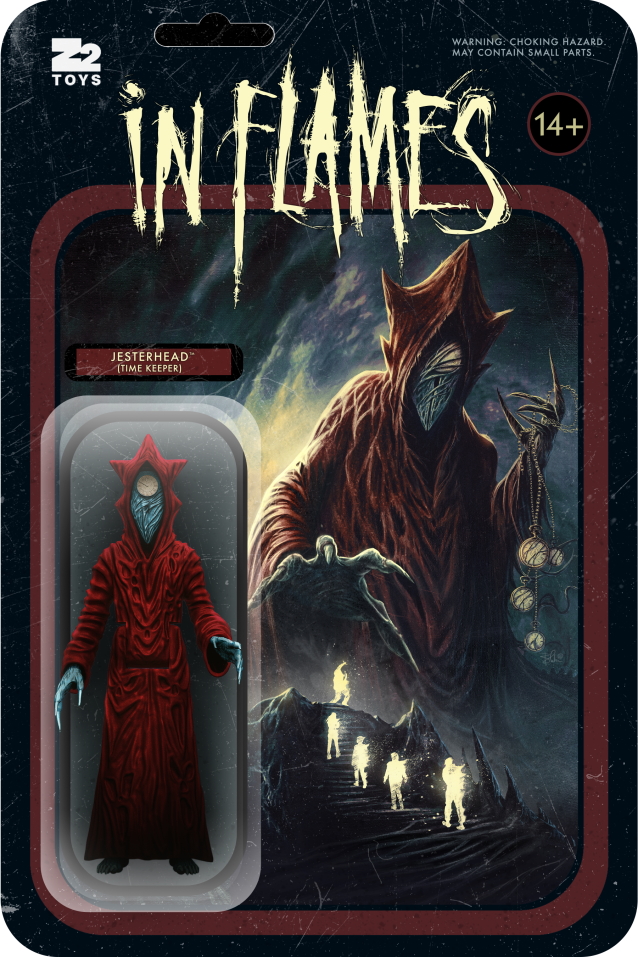 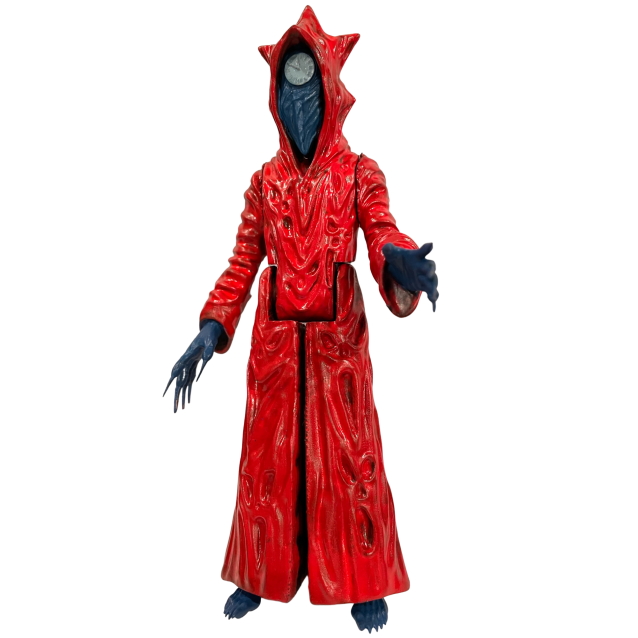