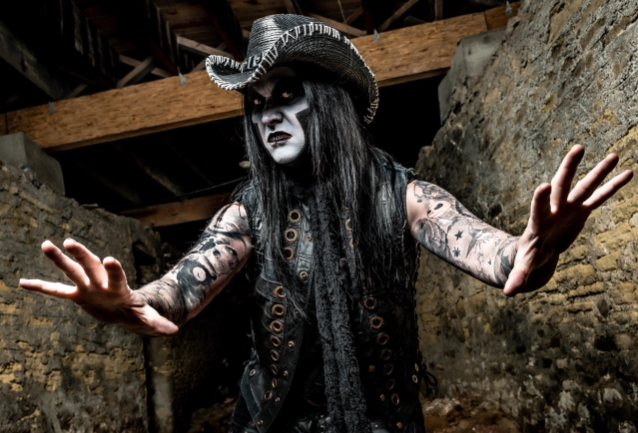 In a new interview with Radioactive MikeZ, host of the 96.7 KCAL-FM program "Wired In The Empire", Wednesday 13 was asked which METALLICA song he would cover if he had to. He responded (as transcribed by BLABBERMOUTH.NET): "My favorite METALLICA record is '…And Justice For All'. I'm not a giant METALLICA fan. I definitely respect 'em and I know a lot of their stuff, but the '…And Justice For All' record was one of my favorites. I like 'The Shortest Straw' song. I thought that was a cool song. That would probably be the one I would pick, if I could cover it, and I'd put some real bass in it. [Laughs]"

Addressing some of the criticism that has been leveled at "…And Justice For All" over its production, Wednesday 13 added: "To me, it had that same production almost… The drums on that record kind of sounded like ANTHRAX to me. But I [was] playing these cassettes and stuff through a little tiny boombox that didn't even have bass on it. So I never really paid attention to it like that. I don't think I really even noticed it till people started talking about it — for me."

While "…And Justice For All" is considered one of METALLICA's classics, it has been criticized almost since the day it was released in 1988 for the lack of any bass guitar on the record. Jason Newsted's playing is virtually buried in the mix — and many fans feel that drummer Lars Ulrich, who had very specific ideas for how he wanted his drums to sound, is to blame.

Three years ago, METALLICA frontman James Hetfield defended the sound of "…And Justice For All" album, saying that he and his bandmates simply "wanted the best-sounding record" they could make. Asked in an interview with the METALLICA fan magazine So What! if Jason ever approached him and Lars to say that the bass was lower in the mix than he had expected, Hetfield said: "He probably did. I don't know what my answer was then, but it was kinda done. I mean, I will say, it was not all about, 'Fuck him. Let's turn him down.' That's for sure. We wanted the best-sounding record we could make. That was our goal. We were burnt. We were frigging fried. Going back and forth [between touring and mixing the album]. Playing a gig. No earplugs, no nothing. You go back into the studio, your hearing is shot. If your ears can't hear any high end anymore, you're gonna turn it up. So we're turning the high end up more and more and more and all of a sudden, low end's gone. So I know that played a bigger part than any hazing or any ill feelings towards Jason, for sure. We were fried. We were burnt."

Hetfield also addressed some of the criticism leveled at METALLICA by one of the "…And Justice For All" album mixers, Steve Thompson. In a 2015 interview with Ultimate Guitar, Thompson suggested that Ulrich was the culprit for the lack of any bass guitar on the record, claiming that Lars wanted his drums to sound a certain way — even if it meant cutting out the bass.

"We wanted it tight," James explained. "We wanted it fucking tight. That's what we wanted. We wanted the snare, we wanted the guitar, we wanted everything up front and in your face and really tight. And we thought we got it. And, you know, we kinda know what we want to sound like. Can we sit behind a desk and make it happen? No. We ask people to do it, and they do it. So [Thompson] did his job. He's got nothing to apologize for or point fingers at. No one's to blame for 'something.' It is a piece of art. It happened and it ended up the way it is for a reason. And for reasons we were just talking about. We were burnt. We're traveling, we're playing a gig, our ears were fried. We were not sleeping. He doesn't need to defend himself. He was a part of an awesome album in history, so I think he should be maybe be a little easier on himself."

James also once again dismissed calls for METALLICA to remix "…And Justice For All" so that Newsted's contributions are more audible.

In a 2008 interview with Decibel magazine, METALLICA guitarist Kirk Hammett attempted to explain the lack of bass on "…And Justice For All", saying that "the reason you can't hear the bass so well is because the bass frequencies in Jason's tone kinda interfered with the tone that James was trying to shoot for with his rhythm guitar sound, and every time the two blended together, it just wasn't happening. So the only thing left to do was turn the bass down in the mix. It was unfortunate, but for some reason or another, that album is known for the low end being there without the bass being very high up in the mix. It was an experiment, too — we were totally going for a dry, in-your-face sound, and some people really like that sound. A lot of the newer-generation bands, especially, think that album sounds great. But at the end of the day, it was an experiment. I'm not really sure it was 100 percent successful, but it is a unique sound that that album has."

In the Ultimate Guitar interview, Thompson said that he spoke out because he was tired of being blamed for the lack of bass. He remarked: "They flew us out [to METALLICA's Rock And Roll Hall Of Fame induction in 2009] and I'm sitting with Lars. He goes, 'Hey, what happened to the bass in 'Justice'?' He actually asked me that. I wanted to cold cock him right there. It was a shame because I'm the one getting the shit for the lack of bass."

Ulrich told The Pulse Of Radio a while back that fans were extremely vocal about the sound of the album at the time of its release. "I mean, it was unbelievable, you know, '…And Justice For All', " he said. "People were saying, 'That's the worst-sounding record, where's the bass, and it sounds like it was recorded in a garage, and…' But, you know, listen, you do the best you can in the moment and then you move on."