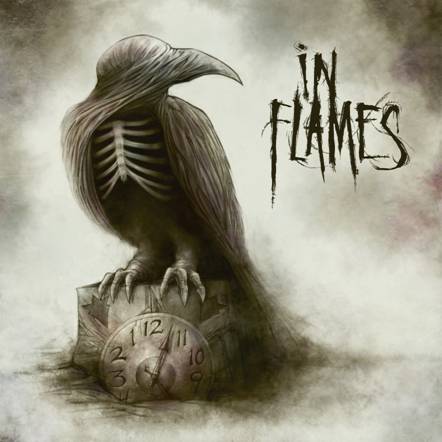 A 30-second audio sample of "Deliver Us", the new single from Swedish metallers IN FLAMES, can be streamed at Amazon.com. It can also be heard in the YouTube clip below.

The "Deliver Us" digital single will be released via Century Media Records on the following dates:

The second in a series of webisodes featuring behind-the-scenes footage from the making of "Sounds Of A Playground Fading", the tenth album from IN FLAMES, can be viewed below.

"Sounds Of A Playground Fading" will be released via Century Media Records on the following dates:

13 songs were laid down for the CD, which was recorded at the band's IF Studios in Gothenburg with engineer Roberto Laghi (HARDCORE SUPERSTAR, LOK, SONIC SYNDICATE).

The cover artwork was created by Dave Correia and can be viewed below.

In an interview with the Swedish tabloid Aftonbladet, IN FLAMES vocalist Anders Fridén, 38, revealed that "Sounds Of A Playground Fading" will almost certainly challenge the band's fans' musical expectations.

"We have some songs that pretty much go against the hard rock formula," he said. "There's a song called 'The Attic' where we have an accordion playing the chorus instead of me singing it. Another song begins with a spoken-word part that evolves into a kind of hard DEPECHE MODE-type thing. We also have some really fast, typical IN FLAMES tunes.

He added, "We've never denied where we come from, but at the same time we like to challenge our listeners."

"Sounds Of A Playground Fading" is the first IN FLAMES album to be recorded without founding guitarist Jesper Strömblad, who quit the band in February 2010 in order to continue receiving treatment for his alcohol addiction.

"It's a really sad situation," Anders said. "We're talking about a friend whom we've known for a really long time. It's like a relationship that has burnt out. It just didn't work out anymore. He's a really great guy in many ways, but it's important that everybody can get along. If they don't, it affects a lot of people."

He continued, "We've lived with this for many years, and it's really sad that things are the way they are. I wish they weren't."

Fridén also talked about the often dark lyrical content on "Sounds Of A Playground Fading".

"Some people I know have passed away, and then you have kids being born," he explained. "I've got two kids myself and, of course, it has affected the songwriting. Suddenly you're not alone anymore."

IN FLAMES's last album, "A Sense of Purpose" (2008),shifted 20,000 copies in the United States during its first week of release. This was slightly less than the opening tally of "Come Clarity" (Ferret),which sold just under 24,000 copies in February 2006 to debut at position No. 58.