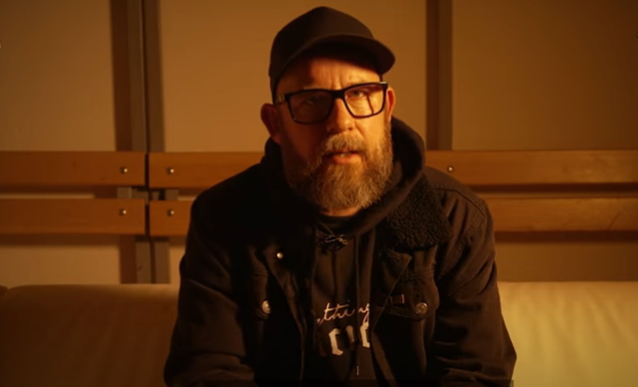 IN FLAMES Singer: 'I'm Happy That We Can Release Albums That Are Challenging To People'

IN FLAMES singer Anders Fridén spoke to Czech Republic's Metalshop TV about the criticism he and his bandmates have faced for their musical evolution, which has seen them adopting a more alternative metal sound after starting out as melodic death metal act. He said (as transcribed by BLABBERMOUTH.NET): "I've been in this band since late '95. My first album was 'Jester Race'. When we released 'Whoracle', there were people saying, 'It doesn't sound like 'The Jester Race'.' And then when did 'Colony', and people said, 'It doesn't sound like 'Whoracle'.' And then we did 'Clayman' and people said, 'It doesn't sound like…' So it's been like that all the time. And I'm happy that we can release albums that are challenging to people, that they don't know where to put it, but in time it will be a classic IN FLAMES album. And I think this new one is gonna surprise people, but in 10 years' time they're gonna say it's their favorite. So it changes.

Earlier in the year, Fridén spoke to MoreCore.TV about IN FLAMES' upcoming album. Asked if the LP's first single, "State Of Slow Decay", is a good representation of what fans can expect from the record, Anders said: "IN FLAMES has always been about melody and aggression. The short answer is yes, but it's not gonna be all fast. We try to explore all corners of metal with our music. Let's put it like this: if you're a fan of IN FLAMES, then you will love this album."

Elaborating on what fans can expect from the LP, Anders said: "This is the fourteenth album. So if you know IN FLAMES, you know sort of what you're gonna get. But I think this is a good mix of the past, the present and wherever we're going, and [it] has a little thing for everyone; it has the heavy, it has the melodic, it has the uptempo and the slow parts. I think it's amazing, and it really represents who we are at this time."

Asked if the pandemic influenced the songwriting process for the new IN FLAMES effort, Anders said: "Well, in a certain way. Lyrically, for sure. I thought this two-year break would make us see us who we are as people and maybe come out on the other side being a little bit more nice and gentle and with more understanding, but I think it's the opposite. So it definitely inspired the lyrical side.