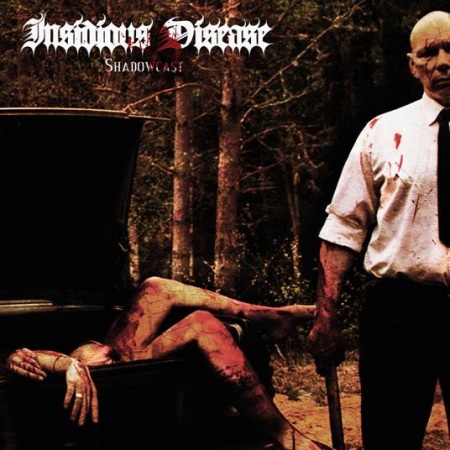 "Boundless", the new video from INSIDIOUS DISEASE (formerly INSIDIOUS) — the international metal project featuring members of DIMMU BORGIR, NAPALM DEATH, OLD MAN'S CHILD and MORGOTH — can be viewed below. The track comes off the band's debut album, "Shadowcast", which was released on July 12 in Europe and July 27 in the U.S. via Century Media Records.

Commented vocalist Marc Grewe: "This video features the guy from our 'Shadowcast' album cover. His name is Roar Hoch-Nielsen. The story behind it is obvious. Roar has the role of a loving father and husband with this kind of funny hobby. He likes to read riffle magazines and after the family went to bed he is starting his obscure work. My part in the video is being the 'electric eye' filming his work.

"We think that something like this happens; we had a case in Austria where this guy tortured his own daughter for over 25 years. He made everyone believe that he was a loving and caring father, but that clearly wasn't the case. Something like this could happen right now. Maybe it's your neighbor who seems to be the nicest person around, but behind closed doors the dark abyss of abnormality is the total reality.

"The plan for INSIDIOUS DISEASE is to hopefully go out on tour at the beginning of next year and of course it would be great to do some famous festivals.

"Hope that we will catch up with some of you sick motherfuckers soon. Until then enjoy our homage to Hitchcock and 'Texas Chainsaw Massacre' done in our own morbid style!”

The "Shadowcast" bloodsoaked cover artwork was created by Kjell Ivar Lund and is being censored by the inclusion of a nice CD slipcase to avoid any trouble with the shops. Apart from an equally gory booklet, the limited-edition first-pressing CD includes two bonus tracks ("Insomaniac" plus a blistering cover of DEATH's classic "Leprosy").

"Shadowcast" was recorded at a studio in Norway with producer Terje Andersen (a.k.a. Cyrus) of SUSPERIA and was mixed by Russ Russell (NAPALM DEATH, DIMMU BORGIR). NECROPHAGIA frontman Frank "Killjoy" Pucci co-wrote and contributed guest vocals to a cut called "Rituals Of Bloodshed".