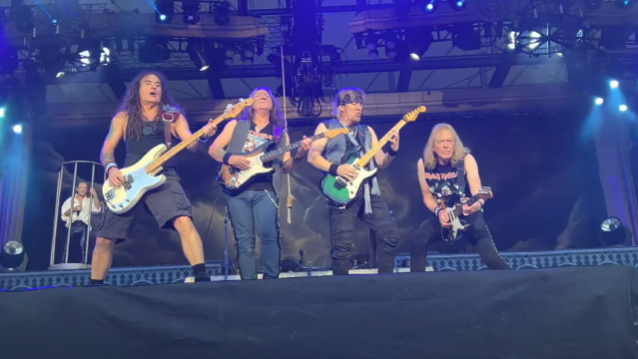 **Update**: On Friday (July 8),IRON MAIDEN manager Rod Smallwood issued the following statement regarding the Bologna cancelation: "The band and l are so sorry we were unable to play for our fans in Bologna last night. As the weather conditions worsened, the promoters came to us concerned about the safety of everyone and the viability of doing the show. They made further enquiries and decided that the event should be cancelled for safety reasons and announced this from onstage. I have to say I fully agreed with this decision and that it was the responsible thing to do considering the amount and scale of surrounding lightning and high winds and having been told what was expected to follow.

"We love playing to audiences here and the last thing we wanted to do was not play and we feel very sorry for our fans who were there, and we fully understand and sympathise with the frustration. It is not possible to reschedule this show, but we promise our fans in Italy that we will return next year."

IRON MAIDEN's concert in Bologna, Italy Thursday night (July 7) has been canceled "due to very bad and dangerous weather conditions, including extensive lightning and high winds," according to a post on the Bologna Sonic Park Facebook page.

Earlier this week, the Italian government declared a state of emergency in five regions because of a drought caused by lack of rain and rising temperatures. To help the regions that have been especially hard hit, Italy is sending $37.5 million in relief funds distributed to several regions, including Emilia-Romagna, where Bologna is located.

IRON MAIDEN is continuing to tour in support of its latest album, "Senjutsu", which came out in September. It marks MAIDEN's second consecutive double album behind 2015's "The Book Of Souls" which is the longest MAIDEN album, with a running time of 92 minutes.

@IronMaiden what’s about Bologna? This silence is a shame. No respect for the fans

So sorry for you guys. The concert was right outside my office. I was bumbed I couldn’t go, but even worse hearing it got canceled on all of you. Damn! I hope you all enjoyed your time in Bologna somewhat. Airbourne are awesome… but that absolutely sucks they canceled the show.

I walked through the storm. It was huge and insane. But, it was over and done with in about an hour. It’s a shame the show couldn’t have just been delayed. Really sorry to all the Iron Maiden fans who came to Bologna today only to have this happen.

@IronMaiden Followed you around the world for over 30 years,travelled from Brighton to be in Bologna right now. Shameful of the band to not say anything to the fans tonight,online or in person.Some very,very disappointed local fans who would have appreciated some acknowledgement.

400€ only for the ticket and to arrive to Bologna from Turin, without counting the merchandise, such a shame that you didn't even showed up 1 single fucking second, At least one fucking damn bastard to tell us sorry guys we can't play to gih, see you next time. No, shame!

As a coincidental event to @ichep2022, was hoping to catch @IronMaiden at Bologna, but electric storms put an end to that. #NextTime#GotTheTShirtAnywaypic.twitter.com/hrMg6aNZ8I 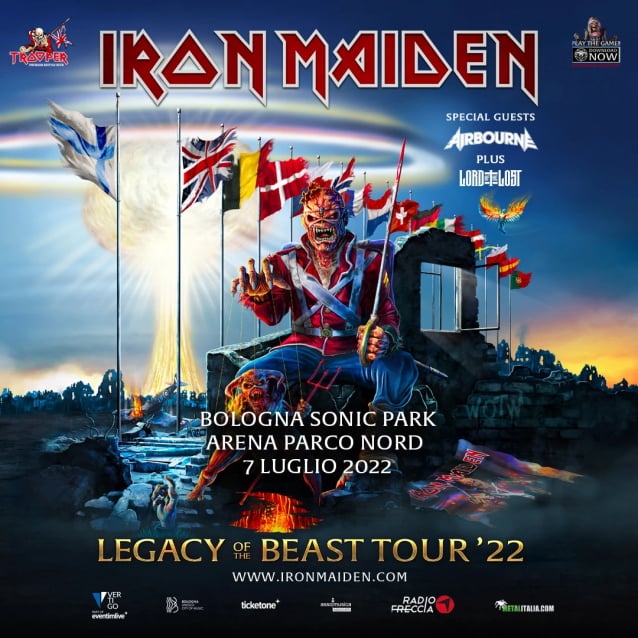