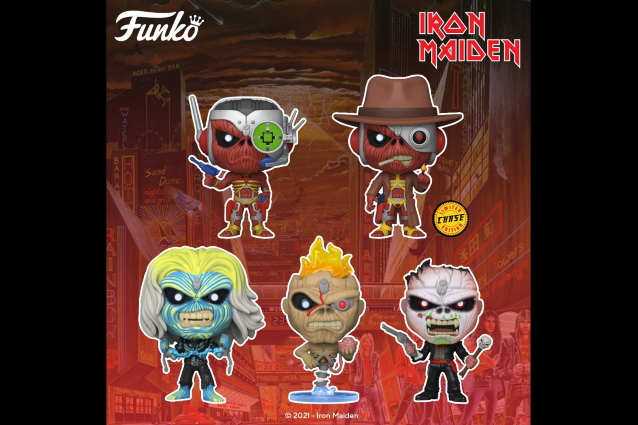 British heavy metal legends IRON MAIDEN have once again teamed up with toy/collectible company Funko to create a new line of figures based around the band's legendry mascot Eddie. Due in February 2022 are "Stranger In A Strange Land" Eddie, "Somewhere In Time" Eddie, "Live After Death" Eddie, "Seventh Son Of A Seventh Son" Eddie and "Nights Of The Dead" Eddie. The new figures will be available from Entertainment Earth.

MAIDEN's previous Funko line of figures was based on the albums "Iron Maiden", "Killers", "The Number Of The Beast" and "Piece Of Mind".

Eddie, whose full name is Eddie The Head or Edward The Head (also known as Edward The Great),is a perennial fixture in the often-violent MAIDEN album cover art, as well as ever present in the group's live shows.

After Funko's Q3 results were announced on November 4 — beating expectations on revenue and earnings per share (EPS) — CEO Brian Mariotti said: "As a credit to our brand, we are continuing to expand our product categories and fan base, increasing fan engagement and bringing innovative new products to market."

According to InvestorPlace, Funko also got into the non-fungible token market, releasing limited-edition digital card packs that include rare cards. Buyers can trade these rare cards to profit from the collectibles market.