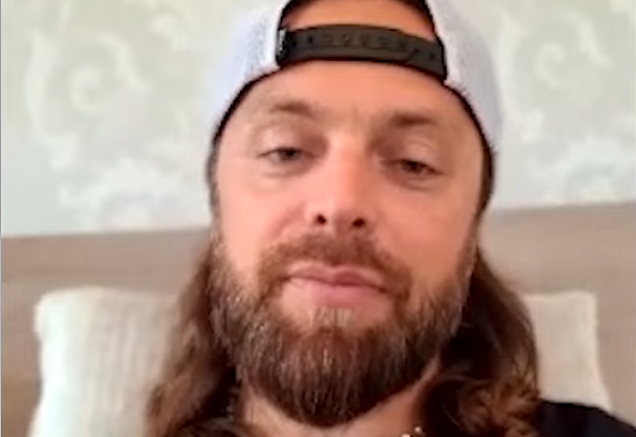 BULLET FOR MY VALENTINE Frontman: METALLICA's Black Album Was First Record I Ever Bought

Guitarist/vocalist Matt Tuck of Welsh metallers BULLET FOR MY VALENTINE spoke to Germany's Guitar about how he first started playing music. He said (as transcribed by BLABBERMOUT.NET): "There was literally one thing that started it all. I always grew up listening to music. My dad, he wasn't a musician but he was a music fan. And his taste was rock and kind of more singer-songwriter stuff. So I grew up listening to — with no choice of my own; it was just always on in the living room, just playing in the background — like, LED ZEPPELIN, Bob Seger, Bruce Springsteen, THE EAGLES, FLEETWOOD MAC. So I grew up just having this thing implanted in my head even before I knew it. And then one day I was watching TV. MTV was on, and [METALLICA's] 'Enter Sandman' [video] came on, and that was it. I was just hooked. I don't know what it was — it was something about the sound, it was something about the visuals of the video and how cool James [Hetfield] looked. It just looked badass, and I was, like, 'Damn. This is it.' And then that was it. I was hooked, man. And I just went on this musical journey."

He continued: "The first album I ever bought was METALLICA's Black Album when I was, like, 14 years old or something, and that was it. I've never looked back. I was hooked. So I did all the METALLICA albums in reverse. I started with the Black Album, '…And Justice For All', '[Master Of] Puppets', blah blah blah. And I just kind of picked up a guitar, saved up some money, managed to get myself a guitar and I just sat down and I just learned everything that I could by ear on those METALLICA records. And that's how I learned to play guitar. And as things progressed then, I got introduced to more heavy stuff, like on the [MTV] show that used to be played called 'Headbangers Ball'… Every weekend, I'd wait for Sunday night to watch 'Headbangers Ball'. I just kind of got introduced to all these heavier, more intense bands, like MACHINE HEAD and PANTERA and stuff like that, SEPULTURA. And I was just, like, 'Fuck.' And that was it, man. I was just off on my journey. And then it snowballed. It just kind of took over my life. All I wanted to do was play guitar; all I wanted to do was start a band with my friends. It was never about becoming famous. I just loved it so much. All my time I just put into learning guitar and trying to create music with my friends. So that was it, really. It's all METALLICA's fault."

Three years ago, Tuck told Radio Bob! that he would love to see METALLICA cover one of his songs. "I take myself to being a 14-year-old kid and going back into that kind of headspace. And METALLICA has always been the reson for any of this happening in the first place," he said. "So to maybe hear them giving one of our songs a little bit of makeover would be a pretty special moment for us. And I think they would do it justice, especially the older stuff. Maybe a song like 'Scream Aim Fire', 'cause that song was just basically built around what they've always done — it's thrashy, it's edgy, it's intense, it's got riffs for days, it's got multiple guitar solos. So I think they could probably do a kick-ass cover of that. That'd be good."

Tuck also reflected in more detail how being first introduced to METALLICA's music when he was 14 years old shaped his earliest songwriting efforts. "I focused all my efforts, even at 14 years old, to sitting down, learning to play guitar by myself," he said. "I didn't take any lessons or anything. I just stuck on the 'Black Album' and off I went — I just kind of learned it from my ears, worked it all out. And that's that, really. So, the moment I got the opportunity to, kind of, jam with other boys, METALLICA was always that band, as we first all started to play those songs together. So we weren't a METALLICA and NIRVANA cover band as such — we were just playing songs from multiple bands, like SLAYER, MACHINE HEAD and PANTERA. Loads of stuff. But METALLICA and NIRVANA were the two bands that our group of friends would most listen to, so that was what we were trying to play."

Back in 2016, Tuck told NME that he wanted to collaborate with METALLICA, adding that the two groups "could make beautiful heavy metal together." Directly addressing the metal legends' lead singer James Hetfield, he put out the call, saying: "Boys, let's make it happen. I'm here, I'm ready when you are."

BULLET FOR MY VALENTINE recorded a cover of METALLICA's "Creeping Death" for Kerrang! magazine's "Higher Voltage" compilation disk. Another METALLICA cover, "Welcome Home (Sanitarium)", was featured on "Remastered" in celebration of the 20th anniversary of the "Master Of Puppets" release and Kerrang!'s 25th anniversary.