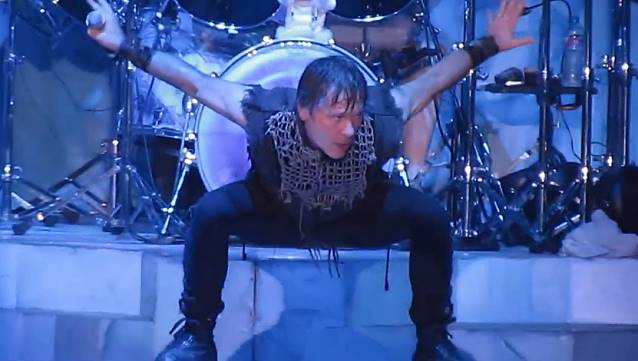 IRON MAIDEN's BRUCE DICKINSON: 'Fame Is The Excrement Of Creativity'

IRON MAIDEN frontman Bruce Dickinson says that he is "not interested in being famous," despite the fact that his band has sold nearly 60 million records worldwide.

Speaking to English folk/punk singer-songwriter Frank Turner for The Guardian web site, Dickinson was asked if MAIDEN still has a bucket list. "I can't be bothered to have those big, self-congratulatory moments," Bruce replied.

"People say, 'What's it like standing onstage in front of quarter of a million people?' I say, 'I really can't tell you, actually, because I'm too busy.' You have no time to stand there and go, 'Let me just stop thinking about the song, stop performing and let me just look at all these people looking at me … OK, thank you very much!'

"I see these wankers onstage at places like fucking Glastonbury wandering around as if they had a mirror attached to themselves, gurning for the fucking cameras and paying no attention whatsoever to that kid in the front row….

"We should be self-obsessed; actually we're audience-obsessed. That's what makes the difference between MAIDEN and everything else.

"I'm not interested in being famous. Fame is the excrement of creativity, it's the shit that comes out the back end, it's a by-product of it. People think it's the excrement that you should be eating. It's not. It's the creativity and the audience and being there in the moment."

Dickinson also spoke about MAIDEN's knack for making unpretentious, energetic, aggressive music for people that don't care about prevailing fashions and trends. "All this shit [music genre segregation], in the '60s and '70s, did not exist," he said. "There was music and that was it. It was no crime against God to have a ZZ TOP album next door to a MOTÖRHEAD album next door to a SIMON & GARFUNKEL album next door to whatever. Nobody went, 'That's fucking weird.' Then, as magazines and radio stations proliferated and they started to compete, so they started to segment their audiences to sell themselves. In doing that, of course, the bands started imitating media life. Bands started crafting their music, thinking, 'I'll do this because that's the sort of thing [BBC] Radio 1 will play, I'll do this because that's the kind of thing that that journalist likes.' And it's just shit."

Back in January, Turner won his round of "Celebrity Mastermind", the celebrity version of the legendary U.K. quiz show "Mastermind", with IRON MAIDEN as his specialist subject.