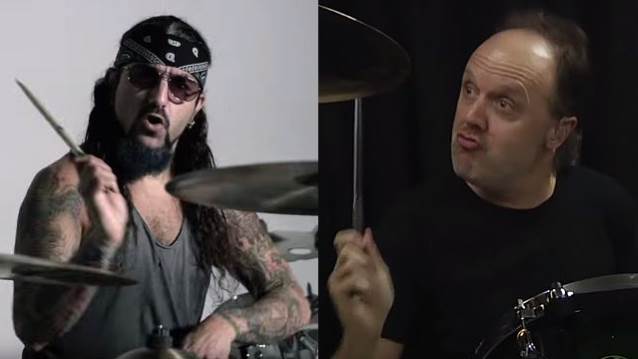 In a brand new interview with Sticks For Stones, former DREAM THEATER and current THE WINERY DOGS and METAL ALLEGIANCE drummer Mike Portnoy was asked if he thinks somebody like METALLICA's Lars Ulrich is a good drummer. He responded (hear audio below): "Well, I have a tremendous amount of respect for Lars, even though he takes a beating in the drum community. To me, his value is not necessarily in drumming, but it has to do with him being a part of a musical revolution that he was a huge, huge part of starting. He's been a tremendous asset to METALLICA, not only as a writer, but as a businessman and his abilities to market things and his ability to arrange music and his performance on stage — he's a very animated player on stage. And to me, I would rather watch somebody like Lars Ulrich on stage than one of these technical drummers that can do quadruple paradiddles at 240bpm. To me, that's boring. Who cares about that?"

He continued: "I'd rather be entertained and go to a show and watch a drummer and have somebody that makes me actually smile. So I don't judge drummers based on their technical ability; I judge them based on the overall package and what they bring to the music they're part of. And what Lars brings to the music of METALLICA is absolutely invaluable. So I could care less if his meter might be slightly up and down, or if his fills are slightly sloppy; I don't care about that. To me, there's way more to being a good drummer than precision and technique."

Asked in a 2008 interview with U.K.'s Rhythm magazine if he was troubled by the fact that he's gotten a lot of flak over the years from people who accused him of being a poor drummer, Lars said: "It used to, back in the day — and I spent a lot of time overcompensating for that on the early records. But then you wake up one day and you're like, whatever. It hasn't bothered me for about 15 years. I'm no Joey Jordison, I'm no Mike Portnoy, and I have nothing but love and respect and admiration for all those guys. When I hear some of the young dudes, they blow my mind with what they can do with their feet and stuff — but it's not something that makes me go, 'I need to feel better about myself so I'm gonna learn how to do what they do with my feet.' I'm not a particularly accomplished drummer but I am very, very, very good at understanding the role of the drums next to James Hetfield's rhythm guitar. I guarantee you I'm the best guy in the world for that, and that's enough for me!"

Ulrich stated about his playing ability in a 2012 interview with DRUM! magazine: "I usually feel like I've regressed. [laughs] I'm like, 'Why can't I do that anymore?'"

He continued: "I can't say that I necessarily sit down to practice, like, 'I'm going to play and practice so I can get better.' What happens is that I just sit down and kind of play to just more stay in shape."