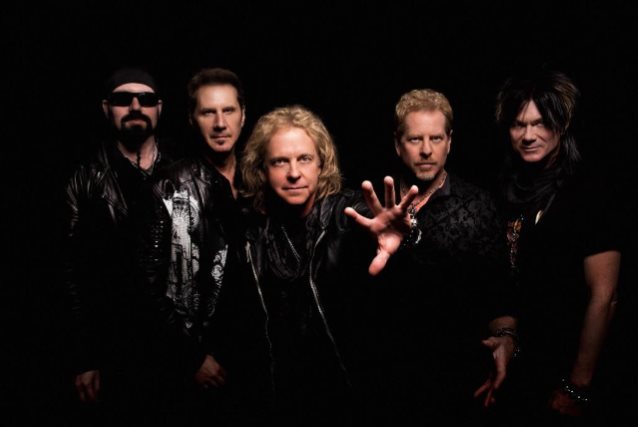 NIGHT RANGER bassist/vocalist Jack Blades was recently interviewed by the Cleveland radio station WKYC. The full conversation can be streamed below. A few excerpts follow (as transcribed by BLABBERMOUTH.NET):

On the importance of continuing to write and record new music:

Jack: "With NIGHT RANGER, it's always about [that] we just want to keep creating. I have a philosophy that once you stop creating, stop using your mind, stop thinking, stop working, whatever it is, that's when you start shriveling up and dying inside. We're sharks — we've just got to keep swimming. Sharks, if they stop swimming, they die. We're just going to keep creating music and touring until someone says we can't do it anymore. So far, everyone says we can still do it, so we feel very fortunate.

"For us, it's all about the music. It's all about creating. A good song will be a good song forever. In NIGHT RANGER, we always focused on songs. Every time I'd bring a song in, or whoever brought it in, whatever song it would be, it was like, if you can't get the song across by strumming it on an acoustic guitar and singing the chorus, then it's not really a great song. If it's not a great song with just a verse and a chorus singing with an acoustic guitar, then it's not a good song."

Jack: "We're one of those rare bands that we all still like each other [laughs], which is a good thing, as opposed to, like, can't stand each other and, like, hate it and we play and then roll. Not with us — we all actually enjoy each other's company, which really makes it great."

Jack: "I think persistence pays off. NIGHT RANGER, when we first started out, we got passed on by every record company in the country – probably twice. Finally, one guy gave us a shot, and the next thing we know, we were selling millions of records. So persistence pays off, and I think that's probably the key with NIGHT RANGER, even today – we just keep drilling at it, and we keep going at it, and just keep punching at it, and we just keep doing that. I think that's the secret of what's going on with us."

On the origins of DAMN YANKEES, the rock supergroup in which he performed with Tommy Shaw (STYX) and Ted Nugent:

Jack: "When I quit NIGHT RANGER in 1989 – we all decided to go our separate ways – about five days later, a friend of mine who ran Geffen Records, John Kalodner, [who] was a famous A&R guy, he called me up and said he had Ted Nugent and Tommy Shaw working on songs in New York City, and something was missing, and he thought maybe I'd be the missing link. Geffen Records flew me to New York. I ended up on Tommy Shaw's doorstep. He lived at that time in a brownstone on the Upper West Side. Tommy and I became fast friends, and Ted came in, and we're like, 'Let's put this thing together.'

"Tommy said, 'I know this drummer dude that's in New York now. He did some shows with me on some solo stuff. His name's Michael Cartellone.' We said, 'Why don't you bring him in while the three of us kind of jam? We'll use him as a drummer just to see how it goes.' We didn't think anything about it. Michael fit right in. He was very easygoing, very quick, picked up things really fast, ideas we'd throw at him, he could play them. Any kind of idea that you'd throw down, boom, he'd do it. He kept his mouth shut; he didn't say a lot while Ted, Tommy and I were figuring out if we hated each other or if we liked each other. The next thing you know, we said, 'Okay, let's make a demo. We might as well use Michael; he knows the song.' The next thing you know, we had a record deal, and it's like, we've got Michael; Michael knows the songs; let's just have him be the drummer.' It wasn't a bunch of auditions or anything. There was a couple of guys we looked at before — I think that Tommy and I, when we were out west, we had a couple of drummers come over — but we were so familiar, and it was so easy with Michael. There was no drama; there was no hassle; there was no anything. It was just super, super easy, and he would do anything that we needed him to do, and play anything we needed him to play."

On what he considers to be the highlight of his career:

Jack: "That's a tough one. It's great to be in NIGHT RANGER, and then it's great to, like, turn right around and go into another band and sell millions of records and have such great success with DAMN YANKEES. But I think one of the highlights of my life was playing with Ringo Starr. He did a VH1 'Storytellers', and I was asked to be the bass player with him. We went to England and rehearsed in rehearsal halls and filmed videos on a rooftop like they did when THE BEATLES did their last show. We did 'Leno', 'Letterman' and all those kind of shows. I think just playing with a Beatle, that was probably one of my highlights."