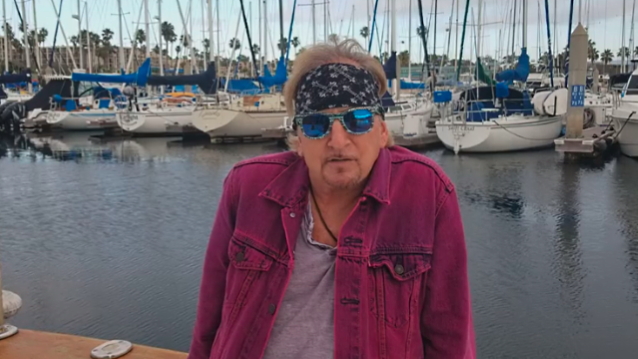 JACK RUSSELL Blasts People Who Refuse To Wear Face Masks: 'If You Don't Wanna Help Yourself, Help Everybody Else'

Former GREAT WHITE and current JACK RUSSELL'S GREAT WHITE singer Jack Russell has blasted people who refuse to wear a mask in public spaces to protect others from possible infection.

Russell addressed the hot-button issue as lawmakers push harder for their constituents to wear face masks to limit the spread of coronavirus. President Donald Trump has been loath to wear a mask, despite the advice of public health experts.

Asked in a new interview with Austria's Mulatschag if he goes out often while in quarantine, Russell — who lives on a 45-foot yacht in Redondo Beach, California — said: "No. I go to the store when I have to. There's no need to be out [in public places]. People don't take it seriously — they don't take the virus seriously. It's sad.

"I don't know what everybody else out there is thinking — they may think I'm full of it — but I take this very seriously.

"It's no small wonder that when you open all these places up, 'Gee, the numbers [of coronavirus cases] rose up.' It's, like, what did you think was gonna happen? It's, like, 'I took my mask off and I got COVID.' Well, what a big surprise that is.

"People just don't think. They come down to the beach down here and they wanna pretend like [the virus] doesn't exist. Well, that's fine. If you wanna get sick, that's great. But put your mask on for me, because I've got my mask on.

"The numbers, the way it works out, if I just wear [my mask], I'm not that safe. If you put yours on too, I'm 70 percent safe as opposed to being zero-point-something [safe]. It's amazing the amount that it changes.

JACK RUSSELL'S GREAT WHITE recently released "Once Bitten Acoustic Bytes", a very special acoustic album revisiting GREAT WHITE's 1987 multi-platinum masterpiece "Once Bitten" featuring some of the band's biggest and most recognizable hits, including "Save Your Love" and "Rock Me".