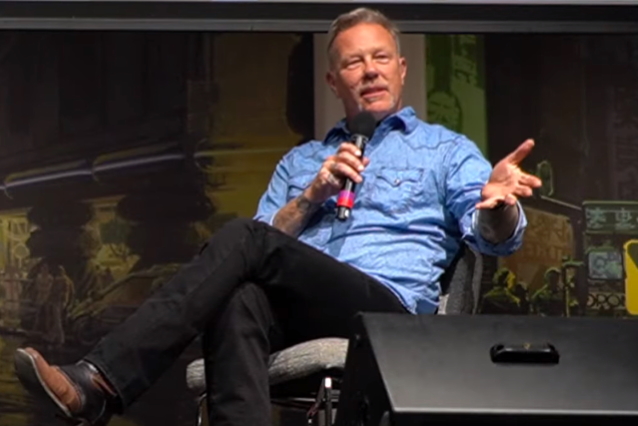 In his first interview since entering rehab in late September, METALLICA frontman James Hetfield spoke with Petersen Automotive Museum executive director Terry L. Karges this past Thursday night (January 30) prior to the unveiling of "Reclaimed Rust: The James Hetfield Collection", which opened to the public today in Los Angeles, California. You can watch the entire 45-minute chat below.

Asked when fans can expect the next studio album from METALLICA, Hetfield said: "That's a great question. We don't know. Right now, I'm sitting in Petersen Museum [laughs], and I don't know what's gonna happen next. That's the beauty of this. We'll sit down and figure out what works best for us. Whatever is coming up, we don't know. And we kind of thrive off of the fear of the unknown — a bit — and being scared just enough to feel alive."

During the interview, Hetfield also reflected on his early years as an aspiring musician in Los Angeles, particularly the time just prior to METALLICA's formation when he first picked up a guitar and eventually started singing.

"I wanted to be in a band," James recalled. "I just knew it. It was gonna happen. And I was gonna make it happen. And I started playing with some friends — local friends — in a band called OBSESSION. And we played cover songs at school parties. And from there on, after I moved, I hung out with people who were a little better than me. And that's how I learned to get a little bit better. I just knew that's what I wanted to do, and I was gonna do it at any cost.

"In the '80s, in L.A., guitar players, everyone was trying to be Eddie Van Halen, and there was millions of guitar players," he continued. "Every band was looking for a singer: 'Singer needed.' 'Singer wanted.' So I sold my guitar, sold my amp and bought a P.A. and a mic, and I wanted to be a singer. That was the next goal. And then when I met Lars [Ulrich, METALLICA drummer] again, I told him, 'Oh, I'm not playing guitar anymore. I'm just singing.' He was, like, 'Well, we'll look for a guitar player.' And then no one could play the guitar like we needed, so I [went back to playing] the guitar. 'We'll just look for a singer now.' And then no one could sing like [we wanted them to], so I [said], 'Okay, I'll sing until we find a singer.' … It just became out of necessity. There was a need. It was challenging for me to do, but I pushed through it, and I got a lot of support. And a lot of people said, 'This is cool. You don't need a frontman running around. Why don't you do that?' And then it kind of stuck. So, people around me gave me the confidence to grow in that."

Hetfield has been largely out of the public eye since last fall when METALLICA canceled an Australian tour and announced that James was returning to rehab to battle his addictions. The singer/guitarist first got treatment in 2002, a process that was chronicled in the 2004 documentary "Metallica: Some Kind Of Monster".

As previously reported, METALLICA will headline five major North American festivals this year, all of which are produced by Danny Wimmer Presents. The events are Epicenter, Welcome To Rockville, Sonic Temple Music + Arts, Louder Than Life and Aftershock. The band will play two separate headlining sets at each stop, with a unique setlist for each performance, resulting in 10 different shows.