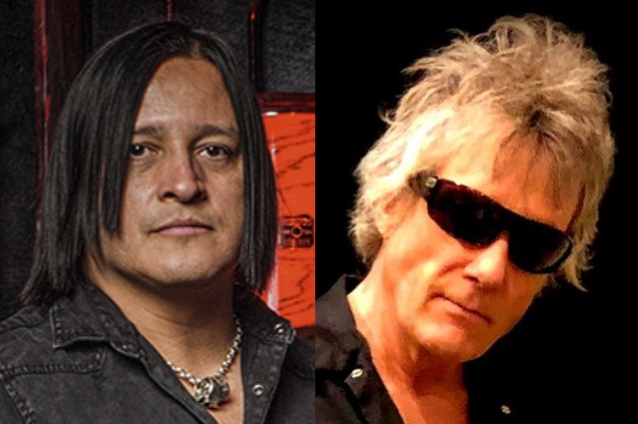 JAMES KOTTAK Is In The Throes Of 'Addiction', Says His Friend ROBBIE CRANE

Veteran bassist Robbie Crane has expressed his concern about the well-being of KINGDOM COME drummer James Kottak whose band was widely lambasted for a disastrous performance at a Swedish festival over the weekend.

KINGDOM COME's June 10 appearance at Sweden Rock Festival was described by the popular Swedish site Rocknytt as the event's "biggest fuckup." Writer Peter Johansson criticized the band for the inclusion of "several lengthy, uninspired, uninteresting and completely meaningless solos on both guitar and bass", saying that the musicians "completely massacred" one of their most popular songs, "Do You Like It". He also singled out Kottak, writing that the drummer played "really badly, sluggishly" and at times failed to keep the tempo "worryingly throughout the concert". At the end of the show, Kottak "stumbled to the edge of the stage to bow with his bandmates," according to Rocknytt.

After BLABBERMOUTH.NET published an article on Sunday (June 12) about KINGDOM COME's Sweden Rock performance, Stevie Rachelle, founder of the Metal Sludge web site and frontman of the glam metal band TUFF, weighed in on the situation via his Facebook page, writing that "this latest incident, and train-wreck of a performance by James Kottak, along with his past public displays of stupid drunken behavior that have landed him on the cover of TMZ and beyond for years, is exactly what Jani Lane [late WARRANT frontman] was doing in his life for years, until those years were cut short. James Kottak is Jani Lane in 2022... and the truth is, there is likely nobody who can save him, but himself," Stevie continued. "There have been bands, a wife, kids, and I am sure managers, family and friends who have tried., just like with Jani Lane... but... James Kottak is still alive. Whether he saves himself or not, only time will tell. Too many enablers... and someone needs to say it."

Among the people who reacted to Rachelle's post was Crane, the current bass player for BLACK STAR RIDERS and formerly a member of RATT, LYNCH MOB and the Vince Neil band. Robbie wrote: "This is a sad situation… James is a good dude… He's a father, brother, son, husband, and friend… But sadly, you are correct… the only person that can save James is James. He has to want it. But like so many before him, addiction fully has him… he is in the center of his own storm and sees nothing but peace around him… He doesn't realize the physical damage he's done to himself. Not yet anyway… if we tried to help would he hear us? I don't know… Hopefully this situation will serve as a wake up call to him… All we can do is pray for him…"

In September 2016, Kottak was dismissed from SCORPIONS during his well-publicized battle with alcoholism and was replaced by former MOTÖRHEAD member Mikkey Dee.

The Question is, can anyone save James Kottak before he Kills himself?