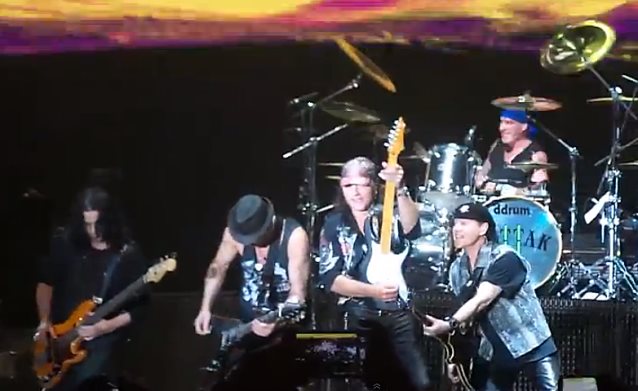 Longtime SCORPIONS drummer James Kottak did not perform with his bandmates at Saturday night's show and was replaced at the gig by Mark Cross (TAINTED NATION, FIREWIND, OUTLOUD, HELLOWEEN, METALLIUM).

It is not clear why Kottak missed the Bahrain show, seeing as he played with the rest of the SCORPIONS during their recent Russian tour, which he called a "huge success". He also tweeted on April 3: "Off to Bahrain for a show and Formula 1 race!"

Fan-filmed video footage of the Bahrain concert can be seen below.

In a 2005 interview, Kottak, who has been in the SCORPIONS since 1996, stated about his audition for the band: "I was always a SCORPIONS fan for the songs on the radio because in America they played them non-stop. I was never the guy that went out and bought their records but I was always like their songwriting and the songs and the whole vibe. Then I was in a band called KINGDOM COME in 1987-1990 and we opened for the SCORPIONS and I saw them and they were so professional on the Monsters Of Rock tour, I was totally blown away. But I never went out and bought their albums, I never went out and bought any other albums either. I was a fan of all music — good or bad. It was on the radio so much, I didn't need to buy it. I spent all my money buying drums, drumsticks and cymbals. In the audition, I knew most of the SCORPIONS music from playing in cover bands. I'm from Louisville, Kentucky. That's how I earned my money in the early '80s — we played 'Still Loving You', 'Rock You Like a Hurricane', 'Big City Nights'. The flattering point with the SCORPIONS [was] when I did fly to Germany for the 'audition,' it wasn't so much an audition, more like, 'Let's get together and see how it feels.' So, I was very flattered about that because they did audition like another 25 drummers. I was very flattered to be picked."

Off to Bahrain for a show & Formula 1 race! http://t.co/NtGjnsi0Fq